I Hate The Power of Political Advertising

We’re immersed in an election battle in Oregon. And the commercials are reminding me how much I hate political advertising, which is essentially a battle of fund raising and reducing issues to slogans and sound bytes. 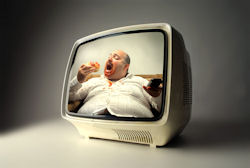 Our vote is about a real problem, with a lot of nuance and shades of gray. It’s about raising taxes to pay for schools and public services. It’s a tough issue. I’ve written about it locally, taking a stand, but I’m not going to repeat that here, because my point here isn’t which way I want the vote to go, it’s about how the advertising is killing public debate.

Instead of a debate on taxes and public funding and public services, we get crap. One side boils it down to “the job killer measures.” The other boils it down to “big business doesn’t pay taxes in Oregon.” The best that we see on television are beautifully done emotional ads that focus on fictitious job losses, a great pitch, but built on lies and exaggerations. The worst that we see on television are knee-jerk slogans, phrases like “job killer measures,” and “big business.”

The problem of course is that most voters decide based on these 30-second ads, and all of them, on both sides, are intended to kill discussion with half truths or selected truths or powerfully communicative lies. Given that none of what we see is beneficial in any way, does a society have to settle for this? Is this really free speech? Is paid advertising on mass media really protected by the constitution?

With the present system, it seems like winning a vote on something as important as taxes for public services is a matter of two powerful variables that outweigh all others: 1.) how much money is spent on the mass media; and 2.) how effective are the ads (the slogans, the pitch) in winning the vote. And that’s just bad. It’s not democracy, it’s not the voting public, it’s the contest over manipulating the vote of the voting public.