Education, Jobs, and the 99 percent. Who Occupies What? Who to Blame?

I’m visiting in New York this week, and yesterday I ran into two different “Occupy Wall Street” demonstrations. And was sent by a friend to this we are the 99 Percent site, an eloquent and disturbing look at that movement. 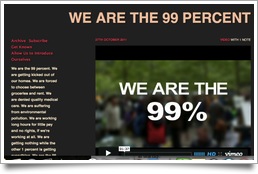 . I know I don’t know what’s really going on there. And I know that what I see on that site is just one image of truth. But damn, those stories are painful to read. There is real hurt there.

And the recession lingers on. We have all those unemployed people who don’t have money to spend, the economy is still dragging downwards. House prices are still low. Sure, we have bright spots, like the startups.

It makes me wonder about the overriding desire to have somebody to blame. These are sad stories. The underlying theme is people who have followed the rules, gotten the degrees, and ended up having no jobs and no money.

And then they get to the blaming. This is typical:

Now, I struggle to pay my student loans and health insurance, while the criminal bankers and traders who ruined our lives are busy laughing and collecting their bonuses.

There they lose me. I just can’t believe that things are that simple. Because today’s protesting unemployed lawyer might be yesterdays banker and trader. And today’s banker and trader might be tomorrow’s occupy protester. How simple to just blame criminal bankers and traders, but how quickly that idea goes cascading downwards into the nooks and crannies of technology, partisan politics, and the search for the common enemy. There’s the human craving for explanations, combined with the power of simple concentrated ideas, but where does it lead? What, specifically, do they want to change? And who has the power to change it?

I can’t help contrasting the little I know of this with what I remember of the anti-war protests I was part of in the 1960s. I was in the group that occupied the administration building at the University of Notre Dame in the Spring of 1970. How much simpler that was, compared to this seemingly infinite maze of problems today. We wanted out of the Vietnam War, we wanted to stop the draft, and we wanted the university to pull its endowment investments out of the companies we thought were profiting from the war. We had a cause, and we wanted specific changes. Most of us could have explained that in 25 words or less.

And in this case? Not hardly.