Does the Kindle Tell You Something About Your Pricing?

While I tend to think pricing too low is one of the most common mistakes in small business, there’s still something to be said for finding the pricing sweet spot. 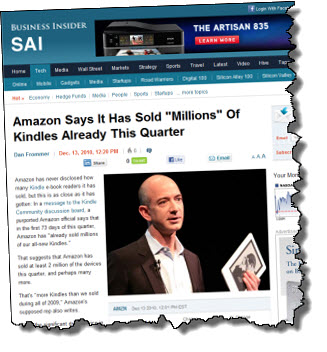 Sometimes elasticity works. For example, in Amazon says it has sold millions of Kindles This Quarter, Business Insider notes:

Amazon [says it] has “already sold millions of our all-new Kindles.”

That suggests that Amazon has sold at least 2 million of the devices this quarter, and perhaps many more.

That’s “more Kindles than we sold during all of 2009,” Amazon’s supposed rep also writes.

Which proves once again, I suppose, that pricing is still magic. If you search for  Amazon Kindle is overpriced on Google you get a flurry of blog posts and business pundits saying just that … but almost all of them from 2007-2009 when it came out at $399 and then sold for a long time at $299. Now that it’s down to $139, nobody is saying that.

In standard economics, elasticity has to do with price and volume: the more elastic a product is, the greater the increase in sales volume for every unit of decrease in price. Pretty obvious, right? But no, actually, at least not always. Some things are more elastic than others. Think for a second about cheap sushi, for example. Would day-old sushi sell well? How about discount dentistry?

And then there’s this: theoretically, to break even on the price drop, amazon.com has to sell 2.15 kindles at $139 for every one kindle they would have sold at $299.  What do you think? I think they’ve hit a price sweet spot, low enough to attract a lot more buyers. Also, I think there’s another factor in the equation, because those higher-volume Kindles get manufactured for a lot lower unit price.

What do you think? Does this tell you anything about your business?