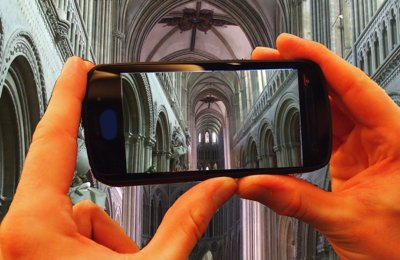 I once saw a man walking around the inside the Notre Dame cathedral in Paris, taking it all in only through the very narrow view of his amateur movie camera viewfinder. The irony swept over me: he was not seeing it while he was there. Instead, he was recording it to see later.  And I wondered: Would he really go back, later, and watches those vast hours of unedited videos? Hadn’t he exchanged his time in the cathedral for video footage nobody would ever watch?

Then last week I read the following:

Recent tests have found that people who think a computer will save their information recall much less of it than those led to believe the machine will delete it.

Fairfield University psychologist Linda Henkel believes something similar may be happening with digital photography. The more easily people can take and access pictures, she says, the less inclined they may be to remember the moment itself. “You’re just kind of mentally discounting it–thinking, ‘Well, the camera’s got it,'” Henkel tells Co.Design.

That’s from Digital Cameras Are Messing With Your Memory on fastcodesign.com. Post author  Eric Jaffe opens that post with this wonderful lead:

Socrates once feared that technology would corrupt human memory. Quaint as it sounds today, he was worried about a form of communication called writing. The more easily people could access something in a document, he reasoned, the less inclined they’d be to remember it.

So that goes back to Socrates. He was thousands of years ahead of his time. He had no idea. But we do, now. What can we call it: “click-save blindness?”