Do You Suffer from Distraction Sickness

Does this seem familiar to you: 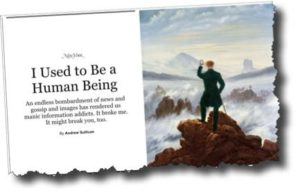 I had sensed a personal crash coming. For a decade and a half, I’d been a web obsessive, publishing blog posts multiple times a day, seven days a week, and ultimately corralling a team that curated the web every 20 minutes during peak hours.

That’s from Andrew Sullivan: My Distraction Sickness — and Yours, in New York Magazine this week. I recognized the author’s name immediately because I’ve seen Sullivan on talk shows often. On TV he comes off as thoughtful and articulate, and he’s frequently introduced as a gay republican and prolific blogger. Here’s the first paragraph of his Wikipedia biography:

Andrew Michael Sullivan (born 10 August 1963) is an English author, editor, and blogger. Sullivan is a conservative political commentator, a former editor of The New Republic, and the author or editor of six books. He was a pioneer of the political blog, starting his in 2000. He eventually moved his blog to various publishing platforms, including Time, The Atlantic, The Daily Beast, and finally an independent subscription-based format. He announced his retirement from blogging in 2015.

The independent blog mentioned is The Dish, where the last post is dated June of 2015.

But that’s just background information. What’s notable about his background, in this context, is the sudden change, the lack of Andrew Sullivan writing and talking on TV in the last year. I read this piece and discovered why. And decided that what he’s calling distraction sickness might be an epidemic.

Sullivan describes a process that seemed alarmingly familiar to me – and, I bet, to you too:

Facebook soon gave everyone the equivalent of their own blog and their own audience. More and more people got a smartphone — connecting them instantly to a deluge of febrile content, forcing them to cull and absorb and assimilate the online torrent as relentlessly as I had once. Twitter emerged as a form of instant blogging of microthoughts. Users were as addicted to the feedback as I had long been — and even more prolific. Then the apps descended, like the rain, to inundate what was left of our free time. It was ubiquitous now, this virtual living, this never-stopping, this always-updating.

Is that not you? Ok. Nobody you know? C’mon, tell the truth.

I tried reading books, but that skill now began to elude me. After a couple of pages, my fingers twitched for a keyboard. I tried meditation, but my mind bucked and bridled as I tried to still it. I got a steady workout routine, and it gave me the only relief I could measure for an hour or so a day. But over time in this pervasive virtual world, the online clamor grew louder and louder. Although I spent hours each day, alone and silent, attached to a laptop, it felt as if I were in a constant cacophonous crowd of words and images, sounds and ideas, emotions and tirades — a wind tunnel of deafening, deadening noise. So much of it was irresistible, as I fully understood. So much of the technology was irreversible, as I also knew. But I’d begun to fear that this new way of living was actually becoming a way of not-living.

I’m not attempting to duplicate Sullivan’s whole article here. I highly recommend you read it yourself and think about it. But here’s one more piece of it I want to add:

Our oldest human skills atrophy. GPS, for example, is a godsend for finding our way around places we don’t know. But, as Nicholas Carr has noted, it has led to our not even seeing, let alone remembering, the details of our environment, to our not developing the accumulated memories that give us a sense of place and control over what we once called ordinary life. The writer Matthew Crawford has examined how automation and online living have sharply eroded the number of people physically making things, using their own hands and eyes and bodies to craft, say, a wooden chair or a piece of clothing or, in one of Crawford’s more engrossing case studies, a pipe organ.

It certainly made me think about my level of the disease. For a split second. Before diving back into blogging.