Do You Like Working Alone, in Teams, or Both?

Did you perhaps catch The Rise of the New Groupthink on the NYtimes.com last week? Here’s author Susan Cain’s interesting lead … 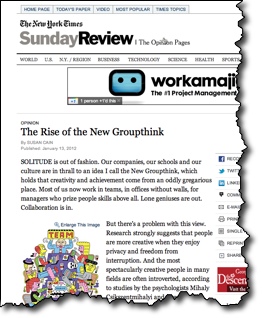 SOLITUDE is out of fashion. Our companies, our schools and our culture are in thrall to an idea I call the New Groupthink, which holds that creativity and achievement come from an oddly gregarious place. Most of us now work in teams, in offices without walls, for managers who prize people skills above all. Lone geniuses are out. Collaboration is in.

But there’s a problem with this view. Research strongly suggests that people are more creative when they enjoy privacy and freedom from interruption. And the most spectacularly creative people in many fields are often introverted, according to studies by …

It’s not that teamwork is bad, but rather that alone work isn’t bad either. It feels like we need to respect both, and the need to approach different problems in different ways. When pendulums swing too far, we go back.

Confession: when I was in business school I avoided group projects as much as I could get away with. When assigned to a team, I sometimes negotiated breaking off a part of the project that I could do by myself.

Susan cites Apple and Steve Jobs and the early history of the company as a good example:

In the wake of Steve Jobs’s death, we’ve seen a profusion of myths about the company’s success. Most focus on Mr. Jobs’s supernatural magnetism and tend to ignore the other crucial figure in Apple’s creation: a kindly, introverted engineering wizard, Steve Wozniak, who toiled alone on a beloved invention, the personal computer.

I’m going to finish this with Susan’s choice of quote from Steve Wozniak’s autobiography:

Most inventors and engineers I’ve met are like me … they live in their heads. They’re almost like artists. In fact, the very best of them are artists. And artists work best alone …. I’m going to give you some advice that might be hard to take. That advice is: Work alone… Not on a committee. Not on a team.

Think about it. Alone.

0 responses to “Do You Like Working Alone, in Teams, or Both?”