The original skit was on Saturday Night Live, Season 1 Episode 5. Dan Ackroyd was the husband, Gilda Radner the wife, and Chevy Chase the announcer. It’s become a bit of a Silicon Valley icon, standing for something:

Husband: No, new Shimmer is a dessert topping!

That was a long time ago, but in fact, Lemon Pledge is still today a floor wax, and it still smells like lemon. And there are multiple lemon dessert toppings. The Pledge in question is an aerosol can with lemon design. You can smell it, almost. And there’s a note of truth in that lemon shows up a lot in floor care and cleaning products, and lemon shows up a lot in dessert things.

I think it was a spoof on the beer commercials in which people would argue whether the beer was good because of low calories or great taste.

It also reminds me of a young person we knew years ago, who was in his late teens, who, when asked what he wanted to be, answered with certainty: “a singer or a doctor.”

I’ve searched YouTube to no avail, but I did find a video of the original skit here. 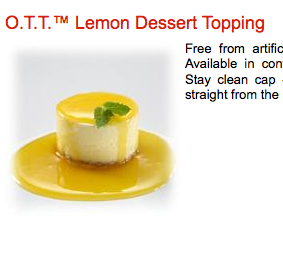 And then there’s the song “Did You Ever Have to Make Up Your Mind,” as recorded by the Lovin’ Spoonful during the 1960s.

True, if you press me on it, there are the occasional products like Arm and Hammer Baking Soda, which is a tooth care product, a baking ingredient, and an odor fighting powder, among other things.

But most products, and most businesses, have to decide. You can’t be a dessert toping and a floor wax at the same time. Deal with it. You have to focus.