Define Your Market By Strategic Intersection

Sometimes segmentation itself – dividing a market into meaningful segments – is strategy. I knew a consultant who divided potential small business clients up according to their decision-making process. Small businesses divided into a range that varied from the seat-of-the-pants autocratic owners, on one extreme, to the consensus-with-the-team owners, on the other extreme. And I was consulting with Apple Computer in the early years when they changed their marketing from focusing on the model and power of the device (Apple II, Macintosh, etc.) to the nature of the users (home, classroom, small business, enterprise, government). That changed the marketing overnight.

One new spin on this that intrigues me is something I want to call segmentation by strategic market intersection. But, I confess, I’d like a better tag for this. I haven’t found it in a book or article, I just started using it.

I developed it first for havepresence.com, in its lean business plan, which defines its target market as an intersection of traits of small business owners. Have Presence does social media posting for business owners. Its potential market consists of owners who match three specific traits:

I can draw that as a Venn diagram, showing the intersection of various factors, as shown here: 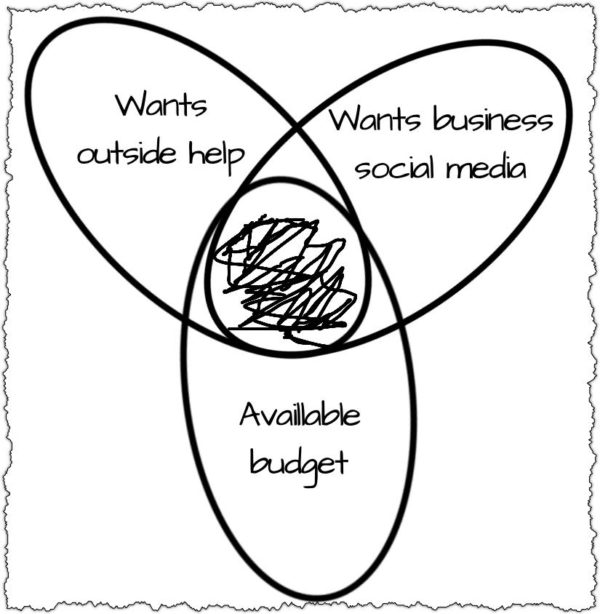 This intersection is also potentially a good example of how market numbers are sometimes educated guesses at best. This one isn’t going to angel investors. However, in a hypothetical pitch for a scalable defensible product, the vast majority of the angel investors I know and work with would accept this definition without having to put hard numbers behind it. They’d understand that the variable of wanting outside help eliminates most businesses with more than 20 or so employees, narrowing the U.S. version of this market to about 5 million with employees and another 25 million without employees. And they’d understand that the variable of having available budget would eliminate most of the 25 million without employees. They wouldn’t demand exact numbers and they would understand that there is a market there. The potential market is clearly big enough to operate in.

And I also mentioned a hypothetical market definition of a business addressing women between 50 and 70 with a minimum income. That’s another intersection.

Finally, I was working recently with a company that wanted to address the needs of entrepreneurs outside the U.S. who had relatively high disposable income and were regular users of social media. That diagram is shown here: 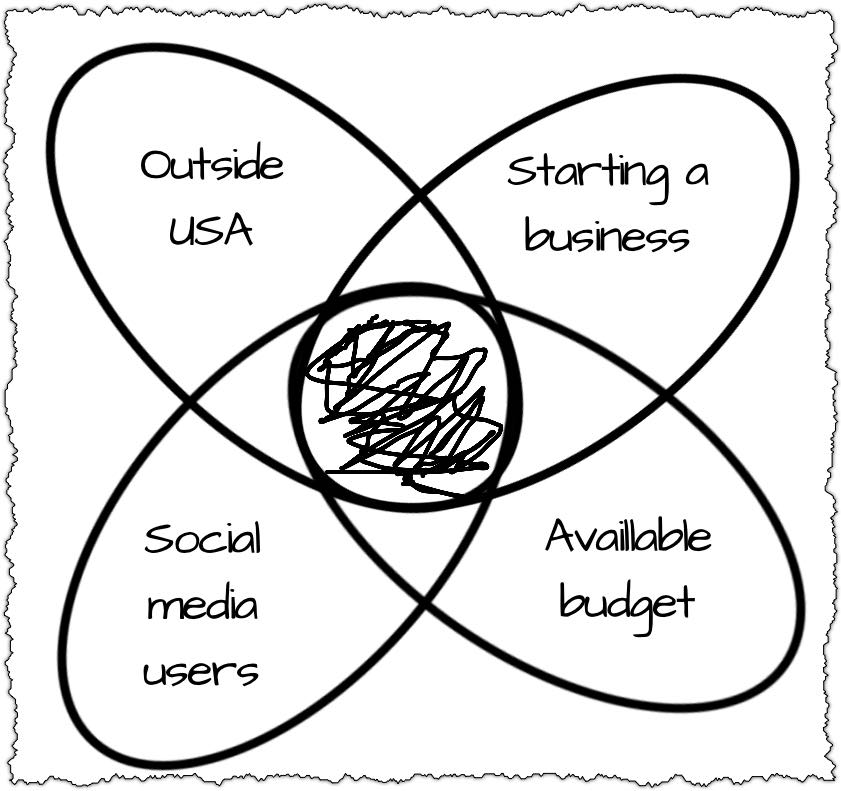 Disclosure: I have a financial interest in Have Presence (my daughter’s business).