The stupid comments that are just thinly-veiled ads, disguised as blog comments … the twitter traffic that’s just “buy me buy me” … like the spam that threatens to drown email altogether, it’s not just annoying. It’s destructive. It’s a damned shame.

… as an addition to my post Revising the Root Canal Theory of Business Planning here, on this blog, last August. As you knew instantly (you being a human, who actually reads), that post is entirely about business planning, not at all about teeth or dentistry. 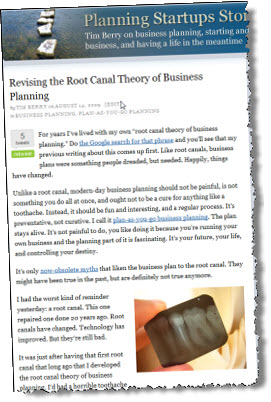 The root canal is a metaphor.

While I love your comments on my blog – I encourage them, respond to them, thank you for them – I hate the increasingly common attempts to circumvent the so-called social media conversation with hidden agendas. Stupid fake comments. And that includes all those stupid generic-fake-praise comments plastered all over blogs for obvious self-serving SEO purposes. Scripts and bots, set loose, in this case crawling around the Web looking for “root canal” in posts, placing the commercial crap there. Pollution on purpose.

As far as I can tell, almost all blogs that allow comments have to be moderated these days because of all this commercial crap, essentially fake comments, advertisements masquerading as conversation. No wonder some of the highest-traffic blogs, like Seth Godin’s blog, don’t allow comments. This is what I was referring to earlier this month when I posted the problem with crowd sourcing is crowds.

Selfish, mean people have almost killed email with their sociopathic behavior. Now they’re after blogging and Twitter. A curse on all of their houses. Dammit.