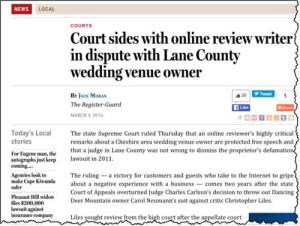 Which reminds me of the ongoing opportunity and problem of reviews. Amazon.com reviews, Yelp reviews, Google, TripAdvisor, and all of them are a combination of powerful, important, and yet also full of problems. Users care and we generally love the idea of picking and choosing based on what all those nice other people decided to share with us. And business owners care too, we live and die with reviews. But there is that temptation to write your own reviews, game the system, get your business five starts by hook or by crook. And there’s that related temptation to use reviews to hurt competition.

In the Oregon case from just last week, the Eugene Register Guard reported the court sides with online review writer in dispute with wedding venue owner. The issue was between wedding venue owner Carol Neumann and customer/reviewer Christopher Liles.

Oops. Neumann sued for $7,500 in damages for defamation, and that suit was thrown out. Neumann appealed and won. The state supreme court just reversed the appeal. The Register Guard reported:

So reviews are protected by the first amendment. Liles’ Lawyer summarized:

Strongly stated opinions about goods and services — no matter how derogatory — are protected speech so long as such expression does not include or imply provably false statements of fact.

Interesting. And it makes sense. But I have some questions for you: