It’s time to note a major change. Just a few years ago business plan contests were an academic oddity, a dress-up exercise at a few business grad schools. Suddenly, or so it seems, they’re pretty much for real. Some very powerful new businesses are appearing at business plan contests, winning significant money, attracting investors, getting funded, and turning into real businesses. 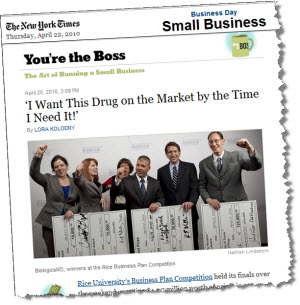 For milestones, try this: last weekend Rice University hosted the first business plan contest to offer $1 million in total prize money. This is a serious event now. If you’re at all curious about how strong some of these businesses are, read Lora Kolodny’s ‘I Want This Drug on the Market by the Time I Need It!’ on her You’re the Boss Blog at the NYTimes.com.

How important are these contests? How real? Well Lora wasn’t the only journalist at Rice last weekend. Fortune and CNN are covering that contest in detail. Expect to see some of these major contests in the Wall Street Journal.

Brad Burke, head of the Rice Alliance for Technology and Entrepreneurship, chief host and organizer of the Rice contest, likes to point out how many of the teams entered have gone on to be successful:

Moot Corp, meanwhile, the first of these competitions, started in 1984, has trouble keeping up with all of its Moot Corp success stories. Moot Corp will be taking place in Austin again this year, in early May, gathering together the winners of several dozen other competitions.

And at the University of Oregon’s annual New Venture Competition, of which I’ve been a judge 12 times, all four of the teams in my semi-finals track looked like real companies with good probability of making it in the real world. That’s impressive. I’ve seen a lot of good companies in that one before, but never before have I done a track in which all four of the four groups seemed likely to be real viable companies in the real world.