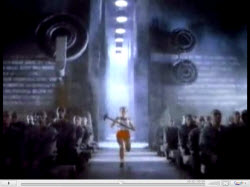 The giant, the big power, that everybody fears, and by whom everybody wants to be acquired … it’s Google these days. It used to be Microsoft. Are you familiar with Lotus 1-2-3? There was a time when Lotus was the giant of software. And Visi on? Look it up: it was the world’s largest personal computer software company in 1983.

Giants are hated and feared.

In January 1985 Apple released the now-famous 1984 commercial that pitted the high-tech newbie against the industry giant (here’s a link to it on (ironically) Google’s Youtube)  … and although it’s hard to believe now, back then that was all about IBM and everybody knew that instantly. Today it’s total anachronism. But IBM was the giant of the industry for about 20 years. It was hated and feared. They called it Big Blue.

So now it’s Google.  What do you think: For how long? Who’s next?