Business is Where Home is Good

Yesterday I posted Home is Where Business is Good here. Today, the exact opposite. That seems like a contradiction, I know; but it isn’t really. I I love a good paradox. 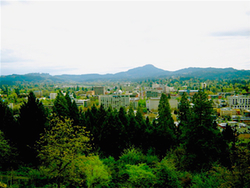 Yesterday’s post was about living where you have to when it’s not your choice. Generally, employees have to move. They get transferred.

My wife and I have made our choices several times, with varying results. The illustration here is Eugene OR, which is where we’ve lived for 18 years after moving Palo Alto Software here from its original location in Palo Alto CA. I posted here about that. We moved from Eugene to Mexico City once for a job, and we moved from Mexico City to Palo Alto for a job. We tried and failed to start a company in Mexico City, where the location was a disadvantage for our particular venture at that particular time. I was a founding director of a company that moved from the heart of the Silicon Valley in San Jose to the other side of the Santa Cruz mountains, in Scott’s Valley, and went public in less than four years.

I really don’t recommend moving from where you are to someplace else because the new location is better for the business you want to start. Move because you want to, yes; particularly if you’re young, and not tied down, and more so if it’s somewhere you want to move to. And move if you’re in the middle of nowhere, with to infrastructure, so you’re at a huge disadvantage. But don’t move because people say some other location is better. The business advantage you get is really unlikely to make up for the personal disadvantages of moving from somewhere you know and like.

The United States is a national economy. Sure there are the startup clusters, but success stories are everywhere. So are Internet access, Fedex, UPS, Kinko’s, and commercial airports. Some people swear by the cities, some prefer the towns. Some like a lot of action, which comes with a lot of smog and traffic and such; some don’t. If you’re going to build your own business, you get to choose.

One of the best moments of my years owning a business was when my wife said:

If we’re going to put up with all the downside of owning our own business, let’s get some of the upside, and move to where we want to live.

So we moved to Eugene. And 18 years later, we’re still glad we did.

(Image: I picked it up from a Eugene city website)