The answer to that question is: no. Not any more than the next person. They just like their business better. They took risks because they saw the goal. 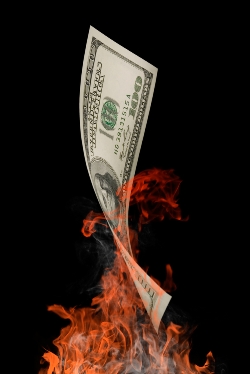 It was the dark side of building the company. They had to. But when it comes to savings and investment, no.

Well, actually, the most correct answer to that question is:

You can’t generalize. Some do, and some don’t. Entrepreneurs are a bunch of hard-to-categorize individuals, and who has good data, because all we really get are successful entrepreneurs.

True story: An investment advisor noted once that my wife and I have the most conservative portfolio he manages. He thought for just a second that might be odd for an entrepreneur. But then he thought about the risk we’ve taken over 30-some years of building our own business, financing it at times with multiple mortgages and credit card debt, signing owner guarantees all the time, raising children, paying colleges … walking around for years with the knowledge that something as beyond our control as one of the major software distributors going under, not to mention a software giant accidentally rolling over us,  could kill the business and leave us with a lot of debt and no house.

And it was suddenly clear to him. No wonder we don’t want to prospect now with what we’ve managed to save through the years. It was clear on his face, he understood. Capital preservation is what we want, now, not more risk. We’re safe now, at least to some degree, because of savings not dependent on the business. But we don’t want to lose those savings.

Yesterday, meanwhile, I read Are Business Owners Risk-Takers? Not When It Comes to Their Finances by Rieva Lesonsky on Small Business Trends.  It turns out, as Rieva points out while summarizing research, that the story above is a good example of exactly what she’s talking about in that post.