Never Do a Contract When a Letter Will Do

I admit I probably shouldn’t be posting this because I’m not an attorney, so I don’t give legal advice. This is just anecdotal, based on what I’ve seen in my business experience. Consult your attorney. I worked for years with a smart, honest business lawyer who — well, let me get to that later in this post. 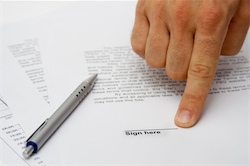 First, however, here’s what I’ve seen in several decades of running a business.

This is just my opinion, and I’m a business owner, not a lawyer. Regarding the smart business lawyer I mentioned, he warned me more than once that spreadsheet and-of-contract formulas would be hard to enforce and would probably be moot anyhow, since disputes would most likely end up in mediation.