I’ve made a lot of mistakes. You can’t build a business from scratch without making mistakes. It’s an entire category on this blog, more than 150 posts. This dumb MBA mistake wasn’t my worst, but it’s one of the easiest to explain afterwards, and I hope one that might help others avoid making it too. There is a moral to this story. 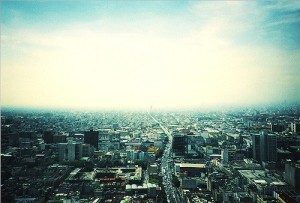 The McKinsey offices sat in a very stylish high-profile office building overlooking a critical freeway junction over Chapultepec Park, linking the fancy Las Lomas residential area with Polanco and the Paseo de Reforma main business district. The streets were wet from rain overnight, and the freeway was, as almost always, jammed. The sky was dense, a mixture of rainclouds and smog.

I needed to quit. It was so embarrassing. I didn’t like to see myself as the archetypical fancy MBA blowing off the first job. I was 33 years old, married, and my wife was expecting our fourth child. I was way too mature for this stuff. But still …

I had arranged a job waiting for me with Creative Strategies International in San Jose. From where I was, returning back to the San Francisco peninsula, Silicon Valley, seemed like returning from exile back to paradise. I liked Creative Strategies, and liked living back in the states. I wanted out of McKinsey.

I really didn’t like the job with McKinsey. It was stupid to have taken it. It was a job meant for a 26-year-old single person blinded by ambition and unencoumbered by relationships. Like most professional firms, success involved putting up with a corporate culture that spent 12 to 14 hours a day in the office, whether or not there was work to be done. The firm actively discouraged families by encouraging long-term business travel but without families, and by running 5-day strategy meetings at beach resorts and forbidding families coming along, even at the family’s own expense. I was not supposed to disagree with partners on … well, you get the idea.

I certainly didn’t belong. I’d been entrepreneurial for 10 straight years, making my own way with freelance journalism and, later, my own consulting, and I wasn’t up to faking awe for the partners. And as a family, we didn’t belong in Mexico City. I had loved that place for nine years in the 70s, it had been good to me, but I was done. My wife is Mexican, she grew up in Mexico City, and had family there, but she was tired of it too. The city was too big, too hard to deal with. We had left in 1979 and shouldn’t have gone back in 1981. I fell for the money and prestige, stupidly, because it wasn’t enough to keep me.

So, back in the office with John Lutz, did I tell him why I was leaving? That I didn’t like the job, had made a bad decision, didn’t like Mexico, I’m sorry, it won’t work.

No. I didn’t. I told him I needed a lot more money.

This is one of the best arguments ever for telling the damn truth, even when it’s embarrassing. I’m still embarrassed, but I’m older now, and, well, I think this is a good lesson to share.

So they gave me more money, and then how dumb did I look?

I still left, and I left looking really stupid. Why didn’t I just tell the truth in the first place?

So there’s the moral to the story. You’ll be in a situation where you’re tempted to slant away from the truth to make it easier, but remember before you do how bad you’ll look if the other side answers the wrong issue, forcing you to admit it was never the real problem. So here there is. It bothered me for a long time but that was 25 years ago or so, and hey, I’ve made a lot of other mistakes since, the sting has worn off on this one. I hope you find the story useful.