9 Women Can’t Make a Baby in a Month

I’ve been meaning to post about Mark Suster’s 9 Women Can’t Make a Baby in a Month for a couple of months now. What a great reminder, and useful in a lot of contexts. 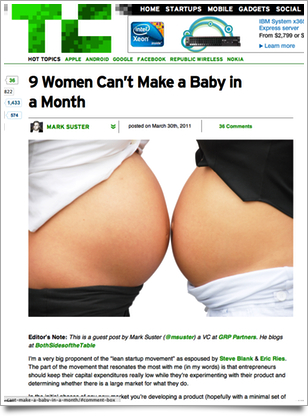 Mark makes his point about the dangers of overfunding a startup with too much outside investment. He says:

Over funding often produces bad behavior in early-stage companies. You hire people too fast, you over build your products, you try to force market adoption and you do PR blitzes before your product is really ready for prime time. And having too much money certainly raises board expectations that you will do big things quickly. No board is going to give you $25 million up front and then expect your year-one staff expenditures to be $2 million.

And that’s great; well said. But I think the underlying problem applies to a lot of other areas in a business. Having three developers doesn’t mean the software project will be done three times faster. A lot of things take time, and time doesn’t divide into meaningful units like bricks.

Mark is a venture capitalist who also maintains an excellent blog called Both Sides of the Table.