7 Bad Habits That Aren’t, plus a Great Title That Is

Here’s a great title: The 7 Bad Habits of Insanely Productive People. That was on copyblogger last week, posted by Sonia Simone, one of the nicest plays on contradiction and irony I’ve seen a while. There’s some real truth here, but hidden in paradox, and a lot of humor too. Who wants bad habits? You have to read the post to see. 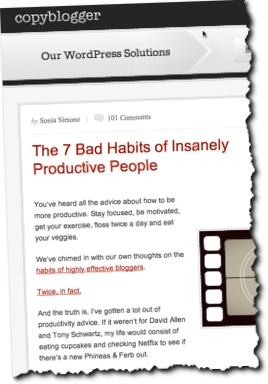 For example, in her intro, musing on productivity advice …

And the truth is, I’ve gotten a lot out of productivity advice. If it weren’t for David Allen and Tony Schwartz, my life would consist of eating cupcakes and checking Netflix to see if there’s a new Phineas & Ferb out.

And all those bad habits? How does this sound:

Not so attractive at all, right? Except that Simone uses each of these to get your attention. Then she tears them back down.

Most of the successful people I know are sensitive and perceptive. And yes, when they get criticized, they feel like shit. Do they let trolls and whiners stop them from doing something great? No. But it’s not because they don’t feel the insults … it’s because their passion for what they do is stronger than the discomfort.

The truth is, if you’re building something epic, you’re going to be juggling a lot of pieces. They don’t always go together neatly. Sometimes they don’t go together at all. If you’re stretching yourself, you’ll drop the ball sometimes. Try to figure out the circumstances in which you should never let yourself drop the ball, Make sure the “A” tasks get done.
Do your best, and say sorry when you screw up. But don’t stop just because things get messy.

So you see how that goes, right? Selfishness has to do with drawing lines and setting priorities, greed is motivating, and distractibility is creativity. I like this quote:

Creativity is the residue of time wasted.
~Albert Einstein

And this one too, under self doubt:

Jim Collins showed nicely in his book Great by Choice that one marker of a business leader who succeeds over time is what Collins calls “productive paranoia.”

for your project to become truly epic — to help an epic number of people — you’re going to have to get out there and talk it up. Which will make some people uncomfortable.