Did you ever look in a mirror after a business meeting and discover a glaringly obvious piece of food in your teeth? Or a coffee stain where you hadn’t seen it before? You know that embarrassing feeling you get at that moment? That’s how you look when you misuse the language.

Yes, I know, many people, even some well-educated people, seem to think grammar and spelling are as obsolete as a VCR. And some rules are easily broken. I’ll start a sentence with “But” sometimes and I sometimes use periods for phrases rather than complete sentences. But I know it when I do it. When these are mistakes, they make you look bad.

awesome
Awe is supposed to be “an overwhelming feeling of wonder or admiration,” or “a feeling of profound respect.” Awesome doesn’t mean good, or cool, or nice, interesting, or convenient. The enormous power of nature might be awesome, a dish in a restaurant isn’t. A view, a storm, a cliff, a mountain, a waterfall might be awesome, a good cup of coffee isn’t.  I suspect this started in the 1970’s when Howard Cosell (a sportscaster) used that word way too often to describe a good football play or a talented football player on Monday Night Football.
I just saw a business plan rating sheet that included “awesome” as one of the possible ratings of certain factors in a plan. No offense to anybody, but no business plan has ever been awesome about anything. And I like business plans.
incentivizing or incenting
Say motivating instead. It’s a real word, it already exists, and has a perfectly obvious meaning. Incentives are supposed to motivate employees, not incentivize them, and not incent them.
hopefully
If you mean I hope, say that instead. When you say “hopefully our team wins” you said our team wins and is full of hope as it does. Did you mean “I hope our team wins?”
Hopefully is like quickly or softly; it gives more detail about how something is done. She runs quickly. He speaks softly. Many people voted hopefully.
unique
Something unique is one of a kind, like no other. It’s unique or it isn’t; there are no degrees of unique. More unique or less unique makes no sense.
criteria
The word criteria is plural. The singular is criterion. This is a lot like phenomena (plural) and phenomenon (singular). I think the world has given up on data, which is technically the plural of datum. I have. 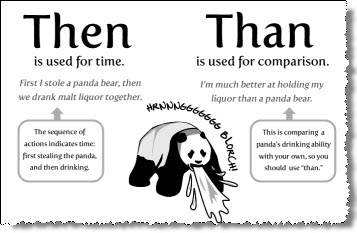 And while we’re on the subject of bad English, here are some other common word and grammar mistakes, some in business and some not, that didn’t make my top 5 list:

then and than
One of my pet peeves: Then is sequential, than is comparison. You have more than I do. First we generate options, then we make a decision.  And the illustration here is from TheOatmeal.com, by the way, a nice post there listing 10 words you probably misspell.
break even
The phrase is poorly defined. It means different things to different people. The most common financial meaning is about the break-even point, which is when revenue for some time frame is equal to costs and expenses. There is a specific financial calculation involved. But many people use “break even” to mean something like payback period, a point in which return from an investment equals the original investment.
turn over
Another poorly defined term, used in a lot of contexts. It often means sales, but sometimes refers to the opposite of employee retention, people leaving a company, and also has some specialized meanings related to business ratios for inventory.
those annoying apostrophes
Some people think you can’t have more than one of anything without an apostrophe. The apostrophe shows contraction (don’t) or possession (Tim’s), not plurality. It isn’t cars’ or books’ or table’s just because you have more than one. Cars’ would indicate possession, something that belongs to more than one car, like the cars’ exhaust. Books’ would indicate possession, something that belongs to more than one book, like the books’ covers. And table’s would be something that belongs to a table, like the table’s legs.
migraine
A migraine is not just a bad headache, and a bad headache is usually not a migraine. A migraine is a special kind of headache, much more common in women than men, usually affects only one half of the head, and often involves dizziness, nausea, and sensitivity to light.