Will Your Business Sink in a Technology Ocean?

Geology is fascinating. If only we could speed up time, we could see mountains rising and being eroded into peaks and valleys, oceans ebbing and flowing, continents breaking up and moving around. Earthquakes. Volcanoes. Glaciers. Landscape in action. Great spectacle. Or it would be, if we could speed up time.

How about continental drift? Speed up time. 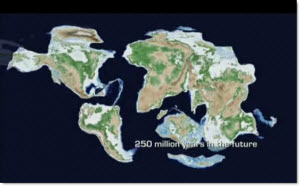 If you click the image here to the right you’ll go through 650 million years in 1 minute 20 seconds.  Watch the continents pull apart. It’s a fun animation.

And technology is just like continental drift, but roughly 25, 50, 100, maybe a million times faster. And accelerating.

For example, mobile technologies. And what if the big blob there on the right were labeled “iPhone,” and other blobs labeled “Android,” “Windows Mobile,” and so on?  That’s a changing technology landscape. And in that case, the splitting of the continents represents maybe a year or two. Right? Call it two years, and that would make it 325 million times faster than continental drift.

The pace of technology’s changing landscapes is speeding up. The technological continental drift in personal computer operating systems common for business use took maybe 10 or 12 years to go through the cycle from CP/M in 1980-1982 or so, followed by the MS-DOS world (we called it PC Compatible), with Mac and then Windows, lately Linux and friends. Or maybe that was 25 years?

We all have to choose platforms. I’ve seen it from a software developer standpoint since 1984, so 26 years now. Then there’s hardware manufacturing, consulting and expertise, and also just plain using the technology. Do you use Windows or Mac or Linus? iPhone or Android or Treo or Blackberry? You’re making choices. 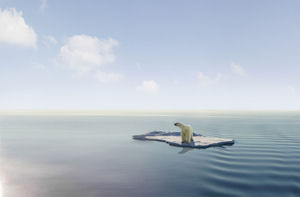 Make the wrong choice and you end up like my polar bear friend here to the left (with apologies for changing the simile abruptly from continental drift to ice sheets breaking up, but it does sort of show it, doesn’t it?) You’re on a shrinking platform. Of course the polar bear can swim long distances. Users can jump platforms, but it costs time and money. Developers and manufacturers can jump platforms too, but it costs more time, and more money.

I’ve seen a lot of businesses rise and fall to the ebb and flow of these technology platforms.

Ideally you want to jump to the next continent in time to ride with it as it grows. But damn, it’s hard to guess right all the time. You’ve seen what happens. You’ve seen some businesses try to mitigate the risk by developing into multiple platforms, then lose focus and fall apart. You’ve seen businesses stick to dwindling platforms and eventually fade away.

What are you doing about this?

0 responses to “Will Your Business Sink in a Technology Ocean?”