Who Took Sports Out of Spectator Sports? 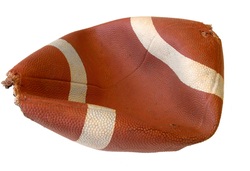 My home town team, the Oregon ducks, was in the championship game for the first time ever. And to say “with great interest” is an understatement. I was glued to the couch.

Tuesday morning a 7-year-old grandson asked me about the game. I said:

It was a great game. The ducks played their hearts out and almost won.

Why are you happy if they lost?

You do see what’s wrong with that, right? I hope so. Just in case, let me explain. And before I do, it’s not him, nor his parents. He didn’t watch the game, he went to bed. His parents aren’t football fans. He and his mom got the results from me the morning after. I use this story because his reaction is typical. He gets it by osmosis in first grade.

I wasn’t happy that the ducks lost. But they played their hearts out in a great game, came back from behind to tie it up with just a couple minutes left, and then lost on the very last play. Sure, I wanted them to be the national champs, I’ve rooted for them for 40 years. Furthermore, I live in Eugene OR a 5-minute walk from the University of Oregon campus, I have a master’s degree from there, so does one of my daughters, and I’ve taught there as an adjunct for 11 years. Go ducks. But it’s a sport, not real life. And the Auburn Tigers won, fair and square.

I was raised to be what my dad called “a good sport.” That meant playing hard,  winning and losing gracefully, and liking the game.

Am I a fan? Hell yes. I love football. I loved to play football when I was young, always loved watching it with my dad and brothers, and still love a good game, especially when I’m watching it with family members who also care.

But there’s something really wrong with the way we deal with spectator sports these days. This is just my opinion of course, but what I see is …

Ask yourself this: when your team loses, does that spoil the time you spent watching? Is it no longer entertainment? Is it not fun? Does it spoil your day, evening, week, or what?