When Patents Are Patently Absurd

Is Paul Allen a patent troll now? The same Paul Allen that was Bill Gates’ partner in Microsoft? Paul Allen who is worth billions of dollars? 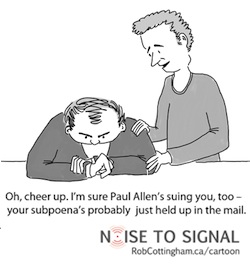 Bill Gates’ original partner in Microsoft, and an extremely wealthy man, is suing nearly everybody who is anybody on the internet (“Google, Apple, Yahoo, Netflix, Facebook, AOL and eBay, among others”) because he has the patent. Wired said:

The four patents at issue allegedly cover basics of online commerce including recommending products to a user based on what they are currently looking at and allowing readers of a news story to see other stories based on the current one, while two others relate to showing other information on a web page such as news updates or stock quotes.

I am not one of those people who – quoting Joel Stein’s latest column in Time – “want everything to be free except what they happen to do to make a living.”

But I do think the patent system is broken. The system was unable to keep up with technology, so patents were issued that made no sense. And patent trolls take advantage.

a pejorative term used for a person or company that enforces its patents against one or more alleged infringers in a manner considered unduly aggressive or opportunistic, often with no intention to manufacture or market the patented invention.

Of course people should get to own their own work. If you invent something really useful, like a light bulb or a phonograph or a plane, or a disk drive or a new kind of scanner, you should get to make a ton of money with it.

But who issued these patents? Wasn’t this all fairly obvious? These are ideas, not inventions. And who the hell knows who was the first to have an idea? And do we reward the first to patent it, when it shouldn’t have been patented in the first place? That’s just dumb.

Disclosure: I’m biased. I’ve been close to two different stupid patent suits where somebody took obvious technology and connected it to some dumb old existing patent and sued. And it was cheaper to pay up than fight. So, business is business, the trolls won.

Also, I’m hoping Paul Allen is actually just intending to make a point. If I remember it right, amazon.com had a patent for one-click purchasing, and they brought it up, made their point, and then behaved like decent citizens (do I have that wrong? If so, please tell me.) And I think Compuserve had a claim on the GIF graphic format, and didn’t insist on pursuing it. Maybe that’s what’s happening here.

And I’d like to credit Read/Write Web and cartoonist Rob Cottingham for the cartoon here. It’s from Cartoon: So Sue Me on Read/Write Web.