What’s a Business Worth? Your Business?

Founder Tom Taulli called it “Zillow for business.” That got me interested. Do you know Zillow.com? Google maps with estimated value and transaction data for every house on the map. How’d you like to see the same thing for businesses? I’ve been looking forward to it since I heard about it. And now it’s released, at least in a beta version.

What’s your business worth? What’s that business on the corner worth? How would anybody know?

BizEquity offers at least one quick answer, although probably not what you’d hoped for.  For a quick demo, go there, type in a ZIP code and business type, and see what you get. Here’s a quick example for restaurants near me: 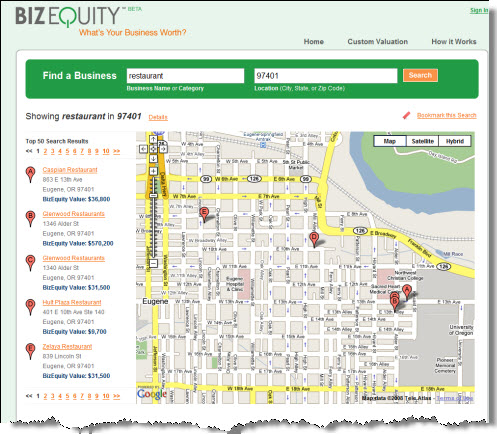 You probably can’t read the details because I had to resize the image, but to give you an idea, several of my favorite restaurants are on the list and worth several hundred thousand dollars each.

There are certainly glitches. In some cases restaurants with several locations show up as separate and distinct entities, and in a couple cases the headquarters or offices are separate and distinct locations, but look like additional restaurants. I’m also curious about the businesses that show up with values of just a few thousand dollars, like the fish and chips place 100 yards from me, which has been there for at least 15 years, but is shown as worth about as much as a used car. What’s up with that?

I checked a couple of alternative sources for formulas, and came up with the average restaurant in the US having gross sales of about $340K and being worth about .4 times sales, or 3.66 times earnings before interest, taxes, depreciation and amortization. So at least it seems like some of these estimates are in the right ballpark.

The hardest part is that while everybody calls it “valuation,” and everybody pretty much understands that it’s what a business is supposed to be worth, there’s a huge range of interpretations. At one end of the range, with high-end mergers and acquisitions, valuation is usually a matter of applying special factors like growth and brand on top of formulas based on multiplying sales or profits by some so-called multiplier. So small but successful privately held software companies are going for something like 2.3 times revenue lately, except that actual transactions range from barely 1X revenue to 5X or 10X revenue depending on the details, such as who’s buying and why. On the other end of the range, valuation is done by experts certified by the IRS, and it’s used mainly for legal reasons; determining tax implications for donations and estate planning for instance, or managing values in divorce settlements.

The range of values gets awkward. If you’re giving shares of your privately-held company to your children, you want a very low valuation. If some big company is trying to buy you, then you want the very high valuation. Since both cases can come up, it might not be all that great to have some objective database available that sets a single valuation.

Tom ought to know. He’s the author of The Complete M&A Handbook and a well known financial writer whose work appears at Business Week, AOL, Forbes, and his own blogs. Still, he admits that BizEquity is just a start, with a long way to go:

“In building BizEquity, I got a big education.  And, it’s only the start.  Valuation is extremely difficult — especially for small businesses.  The data is hard to come by.  And, unfortunately, there is a lot of data that’s wrong — even though we get it from top sources (from credit bureaus like D&B and Experian).  No doubt, the small business market is highly inefficient.
So, our biggest priority is to seek out more third-party data sources as well as get data from our users.  We also will continue to work with valuation experts.  It’s definitely a long-term process.”

Tom developed the site for Advanta, the major credit card company, recruited a solid team of advisors, and introduced it at demo. What’s there now is a function of several public databases, plus formulas, and with a lot of warnings and provisos about the danger of provisional and estimated data.