Was it Social Media That Defeated that Bad SOPA/PIPA Bill?

I was delighted to read Vivek Wadhwa’s take on Social media’s role in politics on the Washington Post: 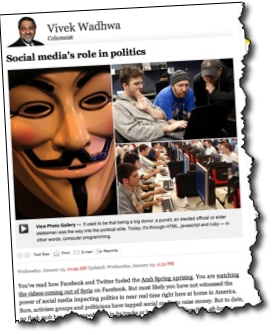 To frame this battle properly, a loosely organized group of Internet leaders outwitted a well-funded lobbying organization. And they did so in grand style, convincing dozens of lawmakers to reverse their votes virtually overnight.

he goes on to liken this phenomenon to the voice of the people in Egypt and then the rest of the Middle East last Spring. But also something else altogether, this:

A sleeping giant — the technology world — finally rose. Google, Mozilla, Reddit, O’Reilly Radar, Wikipedia, and thousands of other Websites rose up to protest PIPA and SOPA.

I like the idea that the defeat of SOPA/PIPA are, like the political changes in the Middle East, due to changes in possibilities and the way people work together. I’d like to think that in this case technology is in a broad scope it’s like what happened a generation or so ago when Mahatma Gandhi, and a few years later Dr. Martin Luther King, changed the relationship between individuals and governments by establishing the power of the public non-violent protest. Isn’t that similar? Disenfranchised, silenced people discover a voice.

Was it social media that defeated SOPA/PIPA, or people suddenly getting annoyed and complaining?

Mine isn’t the greatest analogy, either: It works way better with the Arab Spring than with SOPA/PIPA, because in the first case it did seem like a collection of voiceless individuals; but in the second, that so-called sleeping giant was hardly voiceless. Just distracted, perhaps. Looking in the other direction, and then suddenly confronted with a threat.