CEOs Change the Deeper Meaning of the Ultimate Bottom Line 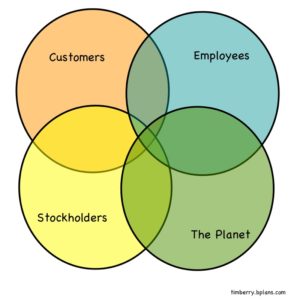 As I read this morning about the Business Roundtable changing this fundamental principle, I was really glad to see it. It’s about time. Several hundred influential CEOs got together and agreed to revise priorities. The next quarter’s profits — which maximizes short-term share price — are no longer the supreme goal and top priority. Here’s the story: America’s CEOs just made a significant, if mainly symbolic, change.

They changed this because it makes good sense. The world is smaller, information is spread wider, and as technology marches on, so too with transparency. Like it or not, corporations face steadily more responsibility for their impact on their employees, their customers, and the world. People care about labor conditions and exploitation. They care about environmental disasters and the risks involved. Bad citizenship is bad business. Buyers and the general public find out about short-sighted and selfish share-price-driven decisions and the corporations suffer.

Corporate behavior is a big deal. Imagine a few people around a table deciding things that affect thousands of employees, whole communities, and sometimes the whole planet. Do we put the plant where its cheapest, or where it does the most good? Do we build the product with the cheapest materials, even though they pollute the fields and clutter the seas? Does employee welfare even matter? We have corporations worth billions of dollars, employing hundreds of thousands of people, making decisions that have long-term far-reaching impact.

Maximizing shareholder value has been a critical rationalization. The world has watched as some very large companies took actions that optimized the price of their shares and nothing else. I’ve known and worked with some people on key executive boards who dealt with these issues thoughtfully, and intentionally; but ended up respecting first and most that their obligation was to the shareholder, not the world. Difficult decisions went the wrong way because they were specifically, explicitly, charged with optimizing the share price, not the world. Share prices vary mostly on very short-term performance. Many business decisions pit long-term goals against short-term margins and profits. And the stock market responds to the short term. So too, the decision makers who think only about share prices.

The new wording prioritizes deeper values. Now, at least in theory, people running these big corporations can’t simply opt out of difficult decisions by parroting the old “shareholder value” clichés. This legitimizes considering the impact on employees, customers, and the planet.

A Step in the Right Direction

It’s a good change. A long time coming, but still, in this age of dystopian nightmares of millions of displaced refugees, anti-immigration politics, nationalism, melting glaciers, crumbling consumer and environmental regulations and protection, that’s at least a step in the right direction.

How much difference will it make? It has to help, right? Even if it’s just theoretical, and hypocritical, it’s changing the deepest priorities as written and spouted from the top. I have my fingers crossed.