True Story: Why I Lied to You When You Called

I’m a bit embarrassed about this story. It’s about lying. You’ll see if you read on that it wasn’t bad lying, not tricking anybody for any bad reason. But it’s a true story, so I’m posting it here because 1.) it might be useful to somebody; and 2.) I’m curious about how often it happens. 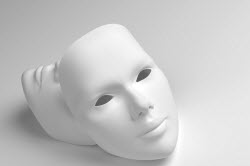 Did you ever see the television commercial where the one small business owner changes his voice on the phone to sound like different people? I did something like that for years. I answered the business phone as Evan Rocha, not Tim Berry. (If you know me well you’ll guess how I came up with that name; and if not, it doesn’t matter. )

It started when I was a one-man company. I’d done the software and the manual and the advertising, and I also took the calls. I didn’t answer the phone as me because I felt like that would be bad for business. Right or wrong, I thought there’d be an image problem, or a lack of confidence. So I became Evan.

Later, even after the company grew up, long past the early days when I had to take calls, I still took tech support and sales calls often. I did it sometimes for special case problems, sometimes to fill in when we were understaffed, and sometimes because the phone got past the fourth ring and I wanted it answered.

I like talking to customers. I always have. And it’s something every business owner should do, and especially software or web entrepreneurs. You should really talk to your customers regularly. But having the president answer the phone feels weird, so I kept using the name Evan.

It’s been several years since I was last on the phone as Evan, so I thought it would be okay to share that now. And if you happen to be one of the customers I talked to as Evan, I didn’t mean to be deceitful and I apologize for lying. It just reduced the awkwardness. But yes, that was me.

Are you an entrepreneur, or small business owner, who’s done that? I’m curious about how many others there are.