True Story: At the Dead Sea

Although it was tame compared to recent years, Israel was very tense in 1974. It was just a few months after the Yom Kippur war. Still, tourism went on. I was a temporary tour guide, in charge of a group of about three dozen people going around the world from Mexico City.

The group was a Mexican group, mostly from Mexico City with some couples from other parts of Mexico. It was an expensive tour so they were economically well-to-do, which in Mexico usually correlates with speaking pretty good English.

Julio Sanchez and his wife Carmen were exceptions. They were from El Salvador and they didn’t speak English. At least they hadn’t spoken English at the beginning of the trip, but during the trip they picked up a lot. Waiters and hotel clerks and people along the day were much more likely to speak English than Spanish. So Julio and Carmen learned how to order meals, and find restrooms, and give taxi directions back to the hotel.

Despite the tension in Israel, it was also Jerusalem, an amazing city to visit, a place people in the group had wanted to visit all their lives. They’d visited the Taj Mahal, Hong Kong, and other splendid places, but Jerusalem was, to most of the group, the highlight. The organized tour went through as many of the main places in Jerusalem as possible — Bethlehem, the Wailing Wall, the stations of the cross — but not the Dead Sea. It was left out on purpose, because of the recent war, meaning tightened security, and more danger.

So it turned out that on the one free afternoon of the stay in Jerusalem, six of my group set out on their own to see the Dead Sea. Normal tours weren’t going there, but they found a taxi driver who, for a fat fee, was willing to take them. I didn’t know until later, but it wouldn’t have been up to me anyhow. They were all consenting adults. I was in charge of tours, logistics, meals, baggage, but not discipline.

They started late. They arrived at an abandoned Dead Sea bathing area late in the afternoon. They had to walk several hundred yards from the parking area and normal beach spot — which was pretty much abandoned — to the water. The taxi waited.

Night fell. They weren’t sure of which direction to walk back to the taxi. They argued. Then suddenly, spotlights, a loudspeaker in a language they didn’t understand. There were military vehicles, people in uniforms pointing guns at them. Angry men, shouting at them and pointing guns, loaded them into a military vehicle. They were driven through the night to a military outpost with a lot of searchlights, and led into a closed room with no windows.

They stood in front of an officer, surrounded by men with guns. There was not a lot of light in the room. The officer asked them questions, angrily, but it was a language they didn’t understand. They could only shrug and shake their heads. What had they done? They couldn’t even ask each other, because the men were angry if they tried to speak to each other at all, and more so because it was Spanish, a language they — the guards, the officer — didn’t understand.

It was at this point — I heard the story a few hours later, in the hotel — that Julio’s newfound English, learned just during the recent weeks of the trip, saved the day.

Julio’s face brightened. At last, something he recognized.

They said it took a couple of seconds before the group realized, and started laughing. The tension was broken. The captured tourists, suspected of being terrorists, and the guards, and the officer, laughed together. Both sides switched to English, and understood each other (Julio and Carmen needed help, but they were there with four fellow tourists who did speak English, and the Israeli army personnel all spoke English.)

The taxi was long gone, presumably hoping not to get disciplined for taking tourists to the deserted Dead Sea area at night. The Israeli solders took the tourists back to the hotel. Check points were passed, the story was told, there was a lot of laughter along the way.

So that’s the end of the story. It’s as true as it was when they told it to me that same night, in the hotel bar, where they found me waiting for their return and pretty worried.

This happened in 1974, when I lived in Mexico City and worked with United Press International. We worked six-day weeks at UPI, so we got six weeks of vacation.

And I took the picture here from our hotel, looking across the street, that same day: 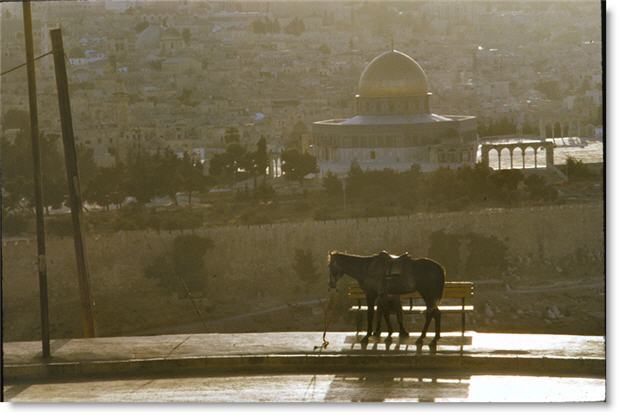