Some of this is things I learned in decision science in business school way back when, and some of it what I’ve learned and seen in the real world for several decades. I see these time-related mistakes too often, and I’ve made every one of them myself, and more than once. To some extent, I suspect that our instincts (or at least mine) might be challenged in relation to letting time run. I hope by listing these common mistakes here I can help you avoid making them yourself. 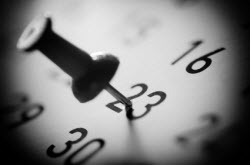 1. When time is on your side, you should wait.

People very often decide before they have to, when there is more information coming, and no penalty for waiting. Never make a decision when there is no penalty for waiting and more information is coming. Wait. I heard this first from David Kreps, who was then (1980) a very young professor at the Stanford Business School, and is now a bit older, and has his own wikipedia entry.

This is an all-too-common problem related to misunderstanding time. I’ve see it a lot, and participated in it more than once. The team gets together to discuss a long-term problem and comes up with a long term Three months later, that long-term problem is still there, and even though the solution is now underway, the team, still frustrated, gets together again, and comes up with another solution. It’s hard to remember that one long-term solution is already underway when you still have the problem. And, in some cases, another solution starts, and takes time and effort, but in another three months, the problem is still there, so the team sets up a third solution, and starts that rolling.

It’s Tuesday morning and you’re in crisis. You need Thing A to appear before Wednesday afternoon or you’re screwed. There is actually a pretty good chance that Thing A will appear in time, but still, the gravity of the situation drives you crazy. What if Thing A doesn’t appear in time? Then what will we do? Quick! Let’s find Thing B fast.

Done right, there’s nothing wrong with that. It’s contingency planning. It’s like thinking ahead of the moves in chess. You ask yourself what you’ll do on Wednesday afternoon if Thing A hasn’t appeared. And if there is a painless way to make Thing B’s appearance more likely, just in case … and it doesn’t interfere with Thing A, then it’s not a bad idea.

However, what a lot of people do is have Wednesday afternoon’s full-blown panic on Tuesday morning because they don’t have the patience to put off the panic until tomorrow. And that’s bad for decision making, bad for your health, and bad for your business.