The Gen-Y Thing is Nonsense

The title here (I love that title) is the magic of Dennis Howlett, author of This Y Generation thing is nonsense posted today on his blog. 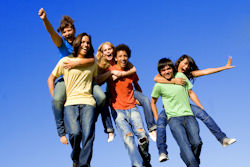 His point in a nutshell:

I don’t know how many times I’ve read alarmist material that says Gen Y, millennials or whatever they’re now called are going to change the workplace beyond recognition. It’s nonsense. All of it.

I can’t argue with that. The Generation Y stereotypes, just like those other generational stereotypes – the Gen X, the Baby Boomers, the Echo Boomers – are fun to play with, but useless as soon as you take them out of the box. That recent college graduate you think of as Gen Y is as much a generation as a set of clothes, costume, or natural habitat. This is a lot what I was saying with the secret to Gen Y performers last May.

Everything I’ve read about dealing with Generation Y sounds to me like the same thing as dealing with people recently entering the workplace in a world of changing technology that has disrupted some of the age hierarchy structure. Everybody wants to matter. Dennis says:

Entitlement? And Dennis offers up a delightful paradox on that issue:

I worry that Gen Y is an entitlement generation where work is not a priority and where dependency upon state and family are genuine issues. On the other hand I also worry that work-life balance is becoming more difficult for those in employment, a theme not lost on Gen Y’ers.

Hmmm … I have to think about that.

And then, when I think, there’s that temptation to get into my old-guy mode and spout “when I was your age” clichés. But no, wait … when I was their age we were taking over the administration building and demanding global change, a new world order, instant power. So what’s this entitlement problem, again?

As an aside, I have to thank Twitter and particularly Brian Solis for catching this one so I could find it today with my morning coffee. I hadn’t discovered Dennis’ AccMan blog until today. I’ve put it on my reading list.