The Broken Spreadsheet That Birthed a Business 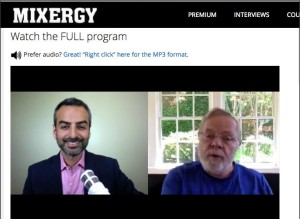 I thoroughly enjoyed doing this Mixergy Interview, published this week, about how I bootstrapped Palo Alto Software from zero to about $10 million annual revenues:

It started one morning at 2 a.m., when I had to deliver a finished set of financials the next morning. It was 2 a.m. and I was tired and done with the financials but I had done something in either Lotus 1, 2, 3 or Excel because I use both. I don’t remember which one it was but I had done something to break the damn spreadsheet! If the financials are going to work, when you change the assumptions the balance still balances and the cash flow, and so on.

So it was 2 a.m. and I had broken the spreadsheet. I thought to myself, there is so much productizability in this. I have to be [building this out,] assumptions, inputs, outputs [and so on], so that this doesn’t happen again.

Andrew posts the complete transcript along with the interview, so it’s easier to browse. Here’s another snippet, about raising venture capital and buying them back:

But then, and this is what’s important for the story, you need compatibility with your investors. When the whole thing crashed in 2001, then we had completely different business models. Our investors needed us to have an exit, a liquidity event. Valuations were back down onto what they really were, you know, two and a half times revenues, for example, for a healthy software company.

But two and a half times revenues wasn’t enough money to make me and my wife and our family feel like we wanted to just sell the business. I had to be 10 or 20 times revenues. But, our VCs were trapped as minority investors. And they were trapped forever. I now have eight angel investments. I understand how bad it is to be trapped as a minority investor with no hope of a liquidity event. I don’t want investors, even as a minority, who aren’t happy with me or my company, so we negotiated. Their lead partner there told me later that not until the negotiations were done, “Tim, actually I can tell you now, you are our best investment for 1999.”

Andrew led me through a lot of stories: How I failed as a hippy, how we got started on the web, how we realized we needed downloadable software, how I changed my role seven years ago to open the field for a new management team, and others.