Social Technology is Changing the Species 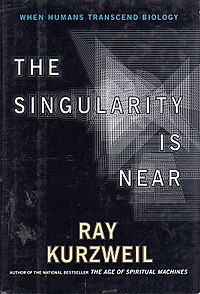 Living the Global Village Changes Us

It’s 10 years now since Kurzweil’s The Singularity is Near was published. The idea is that by 2040 we’ve integrated technology into our biology so much that we are a different species. I thought that was far fetched when I first heard it, but, on further consideration, we’re already there. Social technology is changing the species.

Today, already, we assume an amazing, instant, global communication between ourselves. It’s come on so slowly that we may not notice how strange – how different from what we assumed for our previous 200,000 years – our current world is.

Just think about cell phones and rate plans making minutes feel free. My wife has quick instant conversations with our daughters in New York, and we’re in Oregon. No big deal, right? But just two generations ago communication was either in person or by letters taking days or weeks to arrive. When baby boomers were in our twenties we talked to parents a couple times a year, right. It was long distance. And we assumed distance. We lived with distance.

Doesn’t the unthinking, now instinctive immediate connection change us all? Not that it will take that long before we have cell technology embedded in our biological bodies, but even before that, doesn’t this change how we relate to each other. I say it changes family, parenting, business, everything.

It seems like all at once, even though it’s been years coming. Working remote, or working offsite, is changing work. I know of a major technology company, with millions in venture capital, whose regular everyday software development team is a collection of individuals in more than a dozen countries, in lots of different time zones, in constant communication with each other via instant message, Skype, and email. The founders of that company don’t think of that as anything interesting or unusual; for them, it’s just a better way to do business.

Tomorrow I have a Skype call scheduled with a friend and business colleague to talk about some ideas we want to develop. We’ll sit and talk, she in Ohio and me in Oregon. No big deal, right? Happens all the time? But doesn’t that change what it means to be human? There’s a geographic extension of relationship there, something we almost take for granted now, that hadn’t happened in 200,000 years of humanity before now.

I know of two different growing businesses dedicated to placing tech people from all over the world as remote but permanent and full time employees of larger companies in the U.S. We’re no longer talking about hiring programming teams from India. We’re talking about hiring people from thousands of miles away to join a team and work together every day. Does it take having the chip in our brains to say we’ve changed who and what we are?

Ten years ago when Kurzweil’s book was published, social media was a choice. People could choose to join or stay away, and businesses more so. But is that still true? Consider the social web as it is today:

Somebody told me that Nostradamus, the famous futurist of the 16th century, predicted that about this time the world would be engulfed in a giant web. He thought spiders, I assume, I think worldwide web as digital.

I see both good and bad to it as we change. What seems undeniable, to me, is that we are changing. Like it or not.