That’s not a misspelling in my title; it’s on purpose. The play on words: morning because Mexico City is usually smoggiest in the mornings; and mourning because it used to be such a great place to live, and isn’t at all anymore.  Sure, everything changes, but Mexico City has gone from being a delightful place to live, in the early 1970s —  safe, manageable, full of trees and music and good food and friendly people — to being very dirty and downright dangerous. 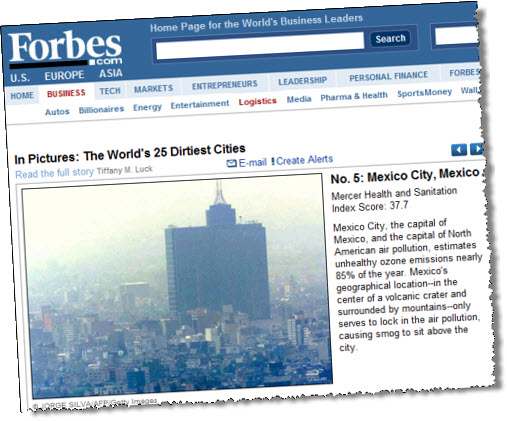 It’s a night-and-day change. Who would believe it, but  when I first moved there as a young man in 1971, Mexico City was safer than any major U.S. city. It was almost like Tokyo in that respect.

My wife and I used to go out for dinner and a movie on a Friday night and take the freeway (periferico) 15 miles in 15 minutes to get to a movie theater in the north of the city. We’d watch the movie, go to dinner in the downtown area, 10 or so miles and another 10 or so minutes away, and then get home (another five or so miles) in 10-15 minutes.

We were always safe taking a walk after dinner. There were some rumored neighborhoods where that might not have been true, but just about anywhere in the main areas of the city were safe. We never worried.

Often, at night as I drifted off to sleep, I would hear the distant wistful sound of a camote vendor who used a distinctive whistle to attract customers to his rolling baked sweet potato cart. And on weekends we might find a rolling corn on the cob (elote) vendor, with a different whistle, selling boiled corn on the cob served bathed in lemon, salt, and powdered chile. Those are great memories.

When I first arrived in Mexico City there was no word in the vernacular for smog. They had some on particularly bad days, but it was nothing like, say, Los Angeles.

Boy, has that all changed. Today, that Friday night itinerary would be about three hours’ driving time. People are very careful about where they choose to take an evening walk. Most of the trees are gone. Restaurants are still spectacularly good in Mexico City, but they’re a lot harder to get to. And the smog and traffic are terrible.

Not long ago, Forbes.com published a list of the 25 dirtiest cities in the world. Mexico City placed fifth in that category.

And this is not just idle criticism of somewhere far away. I earned the right to say this. I lived in Mexico City for 10 years. It’s my city-in-law, in a sense, because my wife was born and raised there. We have three children who were born there.

And for anybody out there who thinks this is the natural result of some sort of social inferiority, forget that please. It’s not just corruption, although that’s a factor. And it’s not just the drug cartels, although they too are a serious factor. No, it’s a combination of disadvantaged economic development for centuries, an unlevel playing field, plus corruption and drugs. And don’t forget what causes the drug problem: the people who create the market by buying and using the drugs. The providers wouldn’t be there if the market weren’t there.