I’m very happy to pass on the news that the state of New York has fined a plastic surgery franchise $300,000 for flooding the Internet with false reviews. This explanation is posted on the New York Attorney General’s official website:

Lifestyle Lift employees published positive reviews and comments about the company to trick Web-browsing consumers into believing that satisfied customers were posting their own stories. These tactics constitute deceptive commercial practices, false advertising, and fraudulent and illegal conduct under New York and federal consumer protection law. The settlement marks a strike against the growing practice of “astroturfing,” in which employees pose as independent consumers to post positive reviews and commentary to Web sites and Internet message boards about their own company. 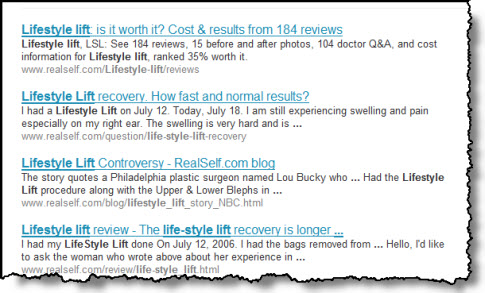 While I have mixed feelings about governments regulating the Web, my gut reaction was celebration. I like using reviews on the Web (I’ve posted about reviews and review pollution here in Bad Apples last Spring and Reading Consumer Reviews last year), but they are easy to fake and abuse. In an email response to one of those posts, a hotel owner told me someone tried to extort $500 from him by threatening a bad review.