Save the Patient. Make Exorbitant Profits. Is This Okay?

How do you feel about projecting excessive profitability in a health care business plan?

Over the weekend I saw the pitch for a brilliant business plan, with great technology, for developing medical electronics that could significantly reduce some kinds of complications in some kinds of surgeries. 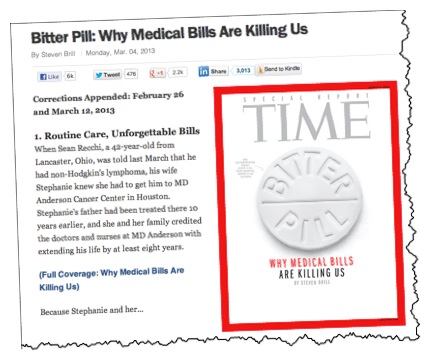 “The world needs this,” I thought. “I hope these people succeed. I hope they get the investment they need.”

But then they got to the financial projections.

Their sales forecast soared to tens of millions of dollars, but their technology was so good that it seemed credible. They had PhDs and patents and a strong team. No problem there.

But they also projected 80-85% EBIT (earnings before interest and taxes). And that got my attention. It’s not just my chronic skepticism about absurdly high projected profits in business plans; it’s also about intentions, exploitative pricing, what Wikipedia calls price gouging. And about ethics.

It reminded me of the Steven Bill cover story in Time Magazine a couple of months ago, called Bitter Pill. Or if you want the short version, watch this Jon Stewart interview with Steve Brill. He says:

Later I asked the inventor about the ethics of pricing. He understood the problem. He gave me a sensitive respectful answer. He said he trusted his more-businesslike co-founders who set the prices. He explained that pricing is set by the whole system, pretty much what Brill’s piece suggests. He didn’t say that profits from this one product would go straight back to research for other products, more inventions, and more improvement in surgical equipment. Insurance companies set the price. His company can beat the existing costs with something much safer. So, if they can execute their plan, they’ll make huge profits.

Medical costs will still go down, if it works, because it reduces complications. Patients will benefit too, with less pain, illness, and death. But according to their own numbers, they could charge a third of their planned price and still make healthy profits.

(Editorial note: I’m not giving specifics on purpose. I don’t want to make this about a specific company. And at this point it’s all hypothetical anyway, just a few numbers in a business plan.)