Revisiting the Database of Investors

I had a call to a venture capitalist pending so I just visited TheFunded.com again, and, well, wow! Why didn’t they have things like this when I was immersed in seeking investment, back in the 1980s? Since I was last there just four weeks ago they’ve improved the interface — it wasn’t bad before, but still much better now — and visiting is a reminder of why I recommended it in the first place.

TheFunded.com is a database of comments and reviews on venture capitalists. I used it this morning to check out a New York fund that’s been cold-calling me about my company. I get a lot of calls that seem to be asking to invest, but usually end up being pitches for consulting services. I don’t ask for such calls and since they take time to return, if I didn’t initiate, I usually ignore. Today however I was curious about the call in my voicemail so I checked with TheFunded.com.

Here’s what I found, with the names omitted for obvious reasons. There’s a pretty good visual rating on that company, which also shows me clearly that the rating is based on three reviews. Here’s a screen shot of that: 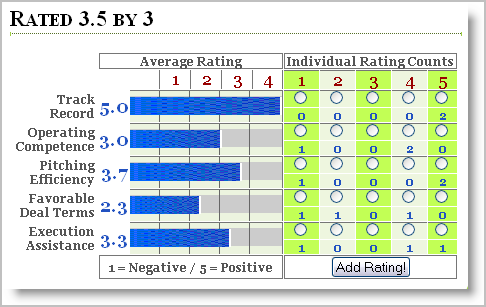 There’s also a series of comments, which are just as useful as the ratings. for example:

Why this matters so much — I’m afraid this is my third post that mentions that site in six weeks — is that choosing investors should be like choosing a spouse. I’ve been saying that to entrepreneurs for years, but it usually led to the obvious follow-up questions asking how they can really find out what the investors are like. Which, in the past, wasn’t easy.

Of course a good review system can be manipulated. It’s very anonymous, which is both good and bad, because it promotes honesty with negative reviews but also allows, I assume (although I really don’t know the details), for false positives. Still, it is way better than anything else I’ve seen. I accidentally checked a “disagree” box when I was making the snagit screen shot for this post, and I still haven’t found an email address I could use to send them a quick note to correct it.

There’s also a very engaging letters section, in which entrepreneurs can comment to investors in general. Here’s an example of one of those that I liked: 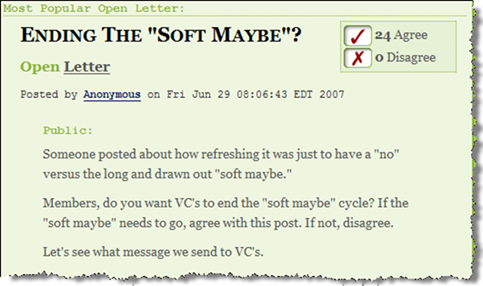 To gain access to the details, I had to register, and wait to be approved. That took a day but was no problem, and was well worth the trouble.

In the early years of Business Plan Pro we used to bundle a database of venture capital contacts. Back then, early 1990s, it was useful. These days there is so much information readily available that the old database bundle would be superfluous.