I’m seeing more and more marketing showing up about so-called crowd funding these days. Sorry, but no. Not yet. Reports of crowdfunding in the U.S. are, as of today, just wishful thinking.

That is, to be sure, unless you play with definitions. For example, if you call KickStarter crowdfunding, then yes, Kickstarter is a great source of prepaid sales and donations, great to validate sales, and it’s healthy and growing. And Kiva too, is an excellent source of small loans for startups. However, much as I like both, neither of those is crowdfunding. Crowdfunding is supposed to mean lots of people each buying small shares of a startup or small business to fund it. Crowdfunding is about equity. People who contribute their money in crowdfunding get ownership in the business. 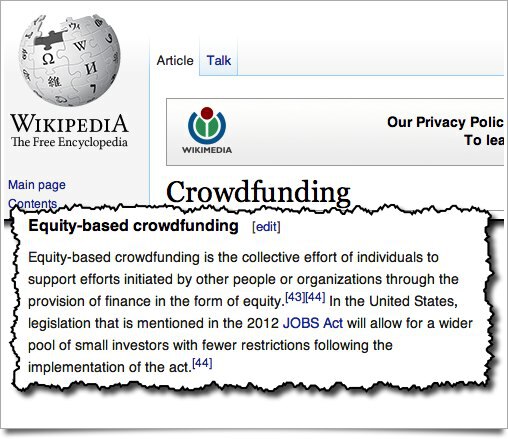 And that, sadly, is not happening in the U.S. today. Yes, as the Wikipedia definition here suggests, the JOBS act of 2012 was supposed to open the door to crowdfunding; but it didn’t. What was supposed to happen was the Securities and Exchange Commission (SEC) was supposed to publish regulations to open up startup investing to more people investing smaller amounts without as many restrictions as before. And it didn’t.

The angel investment group I’m a member of, the Willamette Angel Conference in Eugene and Corvallis, OR, just finished its 2014 investment in a startup. Despite the promise of the 2012 law and the celebrations that followed, angel investing is now regulated and restricted even tighter than it was before. Our group joined six other angel investment groups in our state to figure out how to implement the regulations published last year. And the result: tighter controls, not looser.

Since our group started in 2009, we were always limited to was the SEC calls accredited investors. We always had to be careful not to advertise our meetings or recruit members openly, meaning that we could only recruit specific people who we had good reason to believe met the SEC qualifications.

Specifically, how is it tighter? This year, despite the myth of crowdfunding, we had to be much more careful than before. Our investment is coordinated with a local event to highlight the availability of angel investment in our region. In all past years, we had five finalist startups presenting their pitch to an audience of 200 or so local people interested in startups. The audience included the 35 or so member angel investors, of course. This year, however, we couldn’t have our finalist startups share their full pitch with the audience because the vague SEC regulations led some attorneys to worry that we’d be hurting the startups by making them guilty of a general solicitation.

To be honest, I’m not that anxious to see real crowdfunding happening. I’m not at all sure it will be the boon to startups we all think. Given that spammers are still making money by promising to enlarge body parts, people are still making some dumb choices on how they spend their money over the web. All we need is a well-publicized fraud to lead public opinion on crowdfunding, and step by step things will get worse, not better. Or so I fear.

But for now, at least: No, there is no crowdfunding going on in the U.S. Angel investment is still restricted to accredited investors only.