It’s common knowledge. The best thing to do when you’re stuck in quicksand is nothing. Don’t struggle. Anything you do except nothing makes it worse. You sink deeper and faster.

This I know because somebody told me, and then somebody else, and then it was in a movie. Like I said, common knowledge.

But seriously, do nothing? What are we hoping for? Rescue. I guess it’s obvious, but seriously, we’re supposed to sink gradually into the quicksand without struggling. What discipline that would take. 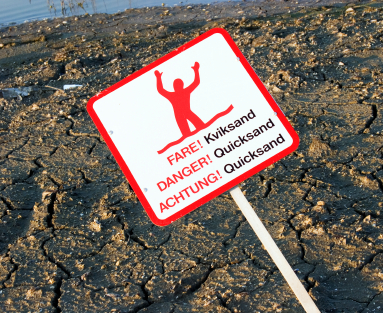 Maybe you touch bottom while you can still breathe. Maybe you’re rescued. And maybe not.

Definition of a quicksand problem: you can make it worse, but not better. You have to have the presence of mind to not struggle, hope for rescue, or maybe touching bottom before you drown.

Examples?  Yeah, that would make sense, make this post easier. It’s tough, though, because some of the examples are hard to put into writing.

I think I see personal examples around the problems of giving and taking advice. What do you do when you see someone you care about making (what you think is) a serious mistake? That’s especially dangerous quicksand when it’s contentious. Can you give advice like a gift, and not take offense if it isn’t followed?

There’s a line in an Emmylou Harris song, Boulder to Birmingham, that references standing on a mountain while the canyon is burning. “And I watched it burn.” Can you do that? And do you have a choice?

And how about the angry customer who’s actually mistaken? Say it wasn’t your software, they actually bought a pirated copy with a bad serial number that can’t be activated; but they’re mad at you, not the pirate. Do you help them out, which validates the pirate business? Or politely decline, which leaves them blaming you? Or the unanswered email that prompted the scathing review which had been sent to a bad return email address, and so, never received? Add a new comment on the review site and you only look worse.

The quicksand problems are there waiting. You just hope you recognize them when you find yourself immersed in them.