Put Your MBA into Your Work, Not Your Title

I’m shocked to note that it’s been seven years since I posted Note to MBAs: Drop the Comma MBA, please! The point was exactly what the title implies, that people with MBA degrees ought not to use that degree as a title like CPAs and MDs do.  That one sparked some surprisingly (to me) animated comments.  I’m even more convinced of that seven years later. 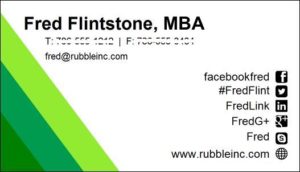 I just got another email from somebody whose email signature is “So-and-so, MBA.” Which reminds me of the business cards, and letters, and promotional material I see where people brandish those three letters after their name.

I don’t think that “MBA” thing behind your name works out for you.

It’s not a matter of licensing and regulation, like MD or CPA. It’s just a master’s degree. In this country alone, accredited institutions grant several hundred thousand masters degrees every year. That’s not including the fake degrees.

So that MBA you earned? Put it on your resume, put it on your blog’s “About” page, and put it in the management team section of your business plan when seeking loans or investment. Use it to know what you’re talking about. But leave it off your name.

I tried, in that post, to clarify that I was against brandishing the degree as a title, not against getting the degree, or against those of us who have that degree. I wasn’t criticizing MBAs in general, just the practice of putting the three letters behind the name. (Although, I do cast some doubt on some facets of the MBA degree in other posts here, while I also recommend it for some people and in some circumstances. If you’re curious, check out the series of posts here.

John Wren, Denver-based startups expert, added my favorite of the several dozen comments, with this one:

I put MBA after my name as a warning. 🙂

Others approached the idea with a whole lot less sense of humor and/or perspective. One comment starts with “What a LOAD OF RUBBISH!” Another blames MBAs in general for the 2008 financial meltdown. Several people defend the practice, while others join me and John Wren in making a bit of fun about it. Several people are offended as if I were attacking their education. I wasn’t.

Put it into your work, not your title

I think that the right way to show off an MBA degree is by using it to improve your work product. Show people that you have an MBA by using the skills, background, and techniques you learned to build better businesses, deal better with people, and make better decisions.

(Image: my thanks to Cam Development, business card software for windows.  I used one of their samples to create the business card example shown here.)