Projecting the Devil in Details

Think of financial projections as a sand castle. You have to build a sand castle on strong wide foundations because thin and elaborate sand architecture just falls apart.  You can’t get too intricate with future financial details either. What’s the phrase? The devil’s in the details? 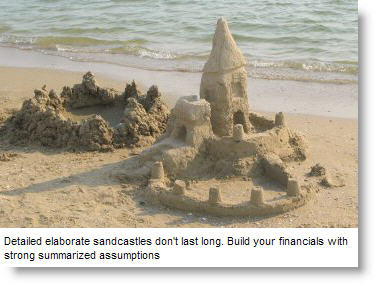 This is one of the more common mistakes in making financial projections. Some people think they are supposed to build future estimates as if they were building accounting statements from past results, detail by detail, record by record, item by item. Then they sweat guessing all those details. It’s like building great detail in the stairways and arches of the sand castle. It doesn’t hold up.

There’s a nice post about this by Shawn Callahan at Anecdote called the Billiard Ball Example.

When I talk about complexity to clients I mention that complex systems are impossible to predict in detail especially as your forecast extends into the future. I point out that there are so many connections among the objects affecting the system and many of the cause and effect relationships are non-linear (a small thing can have a big impact and vice versa). Every now and then someone will say, “but if you could work out all those connections you could predict the outcome.”

He goes into an analogy of the chess game. The possibility is a very large number. Then he goes to the billiard ball example

But I think I’ve just read a better analogy (perhaps equally as impressive) and the topic is billiards. The calculations were done by Prof. Sir Michael Berry in 1978 in his paper Regular and Irregular Motion, in Nonlinear Mechanics and recounted in The Black Swan.

If you know a set of basic parameters concerning the ball at rest, can compute the resistance of the table (quite elementary), and can gauge the strength of the impact, then it is rather easy to predict what would happen at the first hit. The second impact becomes more complicated, but possible; and more precision is called for. The problem is that to correctly compute the ninth impact, you need to take account of the gravitational pull of someone standing next to the table (modestly, Berry’s computations use a weight of less than 150 pounds). And to compute the fifty-sixth impact, every single elementary particle in the universe needs to be present in your assumptions! An electron at the edge of the universe, separated from us by 10 billion light-years, must figure in the calculations, since it exerts a meaningful effect on the outcome. (p. 178)

See? Just a few details, you suppose. Just guess a few assets here, a few interest rates there, and you can build a model that allegedly works. Except that it doesn’t work. Remember, as you make these detailed projections, that your sales forecast is a source of huge uncertainty, and so much else depends on sales. Take a deep breath, and a step backwards, and summarize and aggregate the details.

And no, by the way (just in case you noticed the name coincidence and wondered), Sir Michael Berry is no relation to me.