Politicians vs. Small Business vs. Truth

On Monday I posted True or Not? Top 10 Election Talking Points on Small Business, a slide show with reader voting, on the Huffington Post. Here’s how that turned out – the talking points listed in order. A score of 1 would have been all true, and 10 would have been all false.

I notice the imbalance in the results. 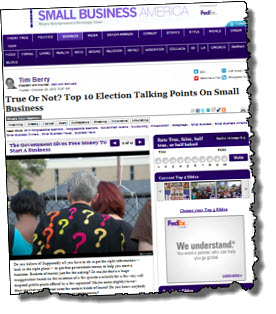 People leaned a lot more towards false, the high numbers, than true. I managed to catch myths that nearly nobody believes – those four bottom points ranked higher than 8 of 10.  I think that’s because I set the points up with a high degree of skepticism from the beginning.

The closest statement to truth, as voted by Huffington Post readers, was that the government favors large business. Frankly I was surprised to see so many people thinking points two and three were true; I don’t.

The biggest surprise here, in my opinion, is that slightly less than half the readers believe small business drives the economic recovery. I would have thought that was true. I’ve seen research showing that small business generates most of the new jobs in our economy.

Another thing that interested me about this post was a pair of comments asking for the facts. One said:

No links to hard data on each issue? Facts are not a matter of ‘HOT’ or ‘NOT.’

some good questions, some questionable presuppositions, and no information, not even links to research

They are right, there are no links to data. That is on purpose and by design. Because, if you think about it, supposed facts and data are the first victims of politics the way we do it in this country. Here’s what I answered:

what makes you think we live in a world where the facts or the links to facts come riding into the scene like the cavalry in bad movies, to save us all with the actual real truth? More and more now, in our public political debates, slogans and half truths are presented by both sides as facts, and, worse yet, facts are virtually manufactured to match slogans. All the talking points, on both sides, are backed by alleged research. Which side do you like? You can find research to support it. That’s one of the points I wanted to make.

So much for getting the facts straight.

(Note: if this looks a lot like what I posted on Small Business Trends yesterday, I apologize for the redundancy. I started with the same list, but I’ve had time to reflect more on those comments about facts and links; that wasn’t in yesterday’s post.)