What would you think of a restaurant that offered really good food, but the salad is free and the dressing is extra? The potatoes are free but the sour cream is extra. The soup is free but heating it costs extra. And table service is free if you wait two hours, but table service in 20 minutes costs extra.

That’s sort of what’s happening with a free mobile app that’s generating a ton of money (It’s been called “a big public test of freemium.”) and a lot of user hostility at the same time. I’m fascinated by the trade-offs here. 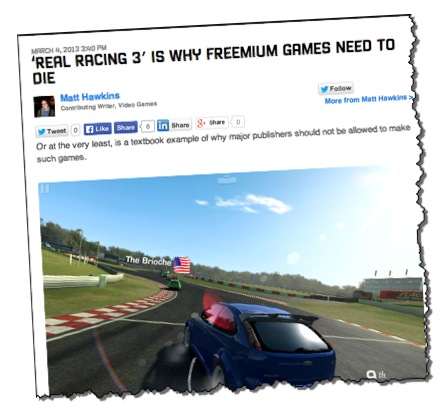 It’s an auto racing game: Real Racing 3, published by Electronic Arts. It’s a free download for both iOS and Android phones and tablets. It shows up very high in multiple mobile app revenue tracking reports, such as the App Annie Index — which means it makes lots of money.

It’s a great game. It’s won several app awards. You drive fast racing cars over simulated tracks. Tilt your mobile device to steer. Use a finger on the right hand to accelerate, one from the left to brake. I’m not a typical gamer, but I do play this one and I like it.

Playing it for free takes real patience. It works with inside-game money to buy, fix, and upgrade cars. In practice, you either repeat races a lot, wait a lot, or buy game money with real money. The rewards for winning races don’t cover the game money requirements to keep upgrading to better cars and better races. Fixing cars takes time but you can buy time with game money, and you can buy game money with real money. Buying cars is required to move up the degree of difficulty, but the reward for a win isn’t enough to sustain the normal flow of new cars needed, so you either repeat races of go to the store to get more game money.

In my case, because I’m not patient, I’ve spent more money on it than I care to admit. I’ve bought game money repeatedly to speed things up. And still, after an embarrassing amount already spent, I’d need about five million game dollars to buy and upgrade the cars I need to complete the levels I’m involved with. And while technically I can afford the $99.95 the game wants from me now, I’m starting to question my common sense and I don’t want to be an easy mark or a soft touch. So I’m repeating races and waiting. And cooking up rationalizations for later.

And I’m absolutely fascinated by the trade-offs here. This is so different from normal price-value tradeoffs. This is not the elasticity we all grew up with.

The publisher controls  the game-money reward for wins, the waiting times, game-money repair costs, game-money purchase price, and game-money upgrades price. Those factors determine the real-money cost to play the game at various levels of patience and waiting. So it’s very much as if they pit revenue against user satisfaction. It’s more money for more hostility, and less money for less hostility.

Which do you want: Happy users, or more money? You can’t have both.