Has this happened to you? Somebody does you wrong, and you take the high road, decide to forgive and forget; but even so, that person avoids you from then on? So you really don’t even have a forgive and forget option? It seems so ironic. And quite common.

Help me. I need a name for this. Double-cross double whammie? Twice-baked business mistake?

Here’s a true story. It happened so long ago that I don’t mind telling it. The guy in question, 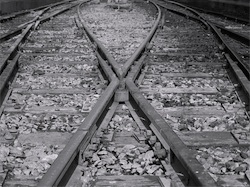 call him Guy One, was a distributor of Apple Computers in Latin America, and I was business planning consultant to Apple’s Latin America group. Once, over a couple of beers, I told him I was thinking of starting a business localizing major software products for Latin America.

He said nothing significant at the time, but within two months he’d started a business intending to localize software for Latin America. It was pretty much the business I’d described. So much so, in fact, that I learned about it when a mutual friend remarked on my having partnered with Guy One on that localization business.

I told him no, I hadn’t done that. He answered: “well then, Guy has done it on his own, and it sure sounds like exactly your idea and your basic plan.”

The truth is that I was miffed for about five seconds, but I let it go that quickly because 1.) I’d never really convinced myself that it would work; 2.) I was more interested in keeping the business I was already doing; and 3.) (Practicing what I preach) I didn’t own the idea. Nobody owns ideas, so if he did it first then more power to him. That’s business, and the idea belongs to whoever builds a business around it.

But from then on – and this is my main point here – Guy treated me like his enemy. I didn’t treat him that way, but – and note the irony – he did to me. I guess he was embarrassed. He started avoiding me, causing some business awkwardness in my consulting business. As soon as I guessed the problem I called him and told him that I’d heard he was doing the localization business and that I was fine with that; I wasn’t going to do it anyway and I would even be happy to help. I made it clear I didn’t care. But the business relationship never recovered. Hence, my use of the double whammy: first, a business double cross; second, a business problem you can’t solve by letting bygones be bygones.

Since that time I’ve seen it a lot of times, and in regular life too, not just business. The aggressor ends up avoiding the victim, causing the double whammy. I guess they don’t want to be reminded. But it is ironic.

Or could it be that his localization business failed?  That came a couple of years later.

Has this happened to you? Can you think of a good phrase for it?