I wish I had data to prove it, but I will say that I’ve seen it over and over again for 30-some years: in business planning, three to five priorities work, and 10 or 20 priorities doesn’t work. In fact, it’s a classic inverse relationship: the more priorities, the less likelihood of implementation. 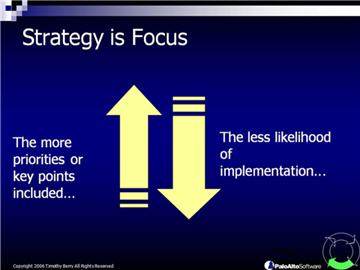 Even without data, there is the anecdotal value of how many business plans I’ve dealt with. The illustration here is a slide I’ve been using in presentations since the 1980s.

It’s a classic inverse relationship. If one goes up, the other goes down. Like traffic and speed, clouds and sun, or teenagers in the household and money in the parents’ pocket.

Priorities are manageable when there are three, four, maybe five of them; but they are meaningless when there are 10 or 20. Who is going to believe the importance of not doing something just because it’s not a priority when there are 20 priorities already? What’s wrong with a 21st?

The opposite is focus. I’ve seen some real successes in business planning when the priorities made sense and the entire company was able to understand the priorities and focus down hard on them. Example? Apple Computer grew from an unmeasurable market share to 15% and from $180 million annual sales to $1.5 billion from 1991 to 1994 mainly by focusing on two key priorities: work with major Japanese companies as allies and develop the differentiation of the graphic operating system as a tool for using Kanji characters.

Thanks to Seth Godin for reminding me of this today with his post The Power Of Chunking. “There really is a rule of seven,” he says, “when it comes to putting ideas into your head.” I’m saying less than seven in this business planning context, but Seth is in a much broader context. And, at the end, he adds:

Seven is probably too many bullets. Three is more like it.

Three we can handle. Three is manageable and memorable and actionable. Give me three things and I can find a place for them in my brain. Each of those three things can probably have three subthings if you like. And then, at least for now, that’s it.