Mexico on the Brink

What a shame. You see the news of the day, Mexico awash in kidnappings and assaults, drug lords rule, police retreating. It didn’t used to be like that. I lived and worked in Mexico City from 1971 into 1979. At that time, that city was as safe as Tokyo.

We used to take walks through the neighborhood around Insurgentes Sur after supper. Vendors in carts sold corn on the cob with lemon and chili. The sweet potato vendors had a special whistle you could hear from several blocks away. Unlike the same city now, back then there were trees along the sidewalks, and places to park. We always felt safe. I did lose my wallet to a pickpocket on a bus, once, and we lost some things to a burglar once, but petty thieves wanted your money, not your life.

I caught Sandy Goodman’s Poor Mexico,So Far from God, so Close to the United States on Huffington Post yesterday. That’s a good post — a bit heavy on the American “bars and girls” stereotype, perhaps, but also a good summary of the enormous crime problems in Mexico today. Drug cartels gone wild, police on the run, murder and kidnapping as a way of life. Sandy makes a good point at the end: 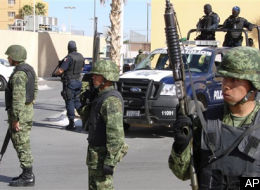 Defense Secretary Gates said on Meet The Press today that he, too, is concerned about Mexico’s drug war and means to provide its government with American resources, training, reconnaissance and surveillance capabilities and intelligence. “It clearly is a serious problem,” Gates said. And, I would add, not just for Mexico.

No kidding. How about chaos right next door. Don’t think the stupid fence on the border is anything but ridiculous (my Mexican friends in Oregon say “why did they bother? We’re already all here.”). Sandy talks about the mess near the border, but it’s not just there. In Mexico City you can’t find normal middle class people who don’t know somebody who’s been assaulted at gunpoint, or, much worse, kidnapped. Or had a loved one kidnapped. Friends worry when I visit. “It’s not like when you used to live here,” they say, with fear on their voice. “Be careful”

A lot of local people blame the war on drugs. They say it’s left a criminal element that is completely ruthless, and has turned to kidnappings and assaults now because it’s easier to make money with that than with drugs. They wish the authorities would let them get back to their own business again, so they would leave normal people alone. Again.

Mexico is my country-in-law. My wife was born and raised in Mexico city and we lived there very happily. I hate to see things falling apart.

Back then I was a journalist. I worked first for United Press International (UPI), then later for Business International, and McGraw-Hill magazines including Business Week. I hung out at the foreign correspondents’ club in Mexico City, where people who knew better than I did would say that Mexico was always six months from chaos; but don’t worry, they’d add, it’s been like that for 60 years. Sounds like chaos is coming a lot closer lately.More on Mexico in the Huffington Post.