It seems like it often rains on Memorial Day where I live, in Western Oregon. not today though; it’s bright and beautiful. From my house, across a small valley, through the tall trees, I can see the flags on a cemetery on the other hill. A lot of the graves have flags today. 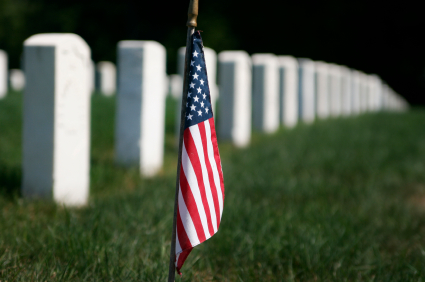 I’m thinking about the flags. How many from this century, Afghanistan, Iraq? Hard to tell. They’d be so young, somebody said.

Switch to reality television. 1969. The draft lottery. They put the 366 possible days of the year in transparent plastic eggs, one each for each possible birthday. The put them all into a giant transparent barrel like we see in lotteries these days. They spun the wheel. They drew a date. Those of us born on that date got a number.

By 1969, most of us opposed the Vietnam war. We talked about what we’d do if drafted. Al became a conscientious objector, emptied bedpans for two years. I was engaged to be married, but that was not going to get me out of the war. But a January birth date did.

It turned out later that somebody did a statistical analysis on the draft lottery and the dates. They started on January 1 and threw them in from there day-by-day to December 31. The later birthdays tended to be on top. Or so I read later.

But we didn’t oppose the people, our peers, who fought. Whether it was their choice, or not.

Few in my generation chose to go to war. One who did, who graduated with me from Notre Dame, chose ROTC. Traveling around Europe, he collected military paraphernalia. His father was in the army. His grandfather had been in the army. He volunteered to be a helicopter pilot, and he died in Vietnam. In his helicopter. We weren’t that close, I heard about it later. My memories of him are of a 20-year-old kid having a wonderful time during a year in college abroad, laughing, drinking Austrian beer, learning; as alive as any memory could be. What a terrible loss.

Memorial Day, patriotism, flags, wars. Protests, anti-war, opposition. Memorial Day isn’t about war, or politics, or patriotism, or whatever might be the opposite of patriotism. It’s definitely not about flags. It’s about young people who died, and the people left behind who loved them. And all the people who endured it, risked their lives, went through the hell of it, for whatever reasons.

I lucked out. I won the reality TV of the last half century, the 1969 draft lottery. And I thank God for that. And honor and respect the ones who went, for whatever reasons. And hope that we can end the present war without causing chaos, and more death and suffering; and that we never fight another war again.