Kindling on the Beach

So my Kindle traveled with me this time, for the first time ever. This was a business trip to Miami, two flights out, two flights back. And yes, there were some off moments, which you can see in the picture. That’s not a stock picture, that’s my Kindle, in my hands, and those are my feet. So I wasn’t working all the time.

The Kindle is the new Amazon ebook reader, released in early December.

The convenience of wireless is fabulous, and the view of the screen is just fine, I’m liking it a lot. 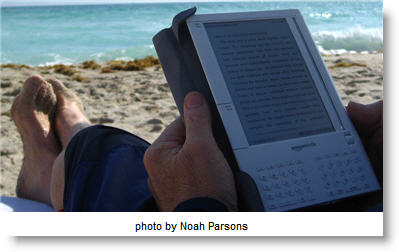 I can’t figure out why it always looks bigger in pictures than it does in real life. It’s really only about the size of a DVD cover. It’s scary to take it to the beach, because it has moving parts and buttons that wouldn’t like sand. However, for the picture here, I was very careful. And here you see it again, it looks much larger in the picture than in real life.

I had a very useful comment to my last Kindle post, to the effect that I wouldn’t have to turn it off during takeoff and landing. Meanwhile, however, back in the real world, I did. It’s against the law to disobey the flight attendants on a commercial airplane. So, when they said “anything that has an off and on switch,” I turned it off.

I wish there were a backlighting option. One thing I think people assume about the Kindle is that you can read it in the dark. You can’t. This is probably related to the supposedly excellent battery life, as in days, not hours. They say seven days worth of battery if you keep the wireless off. But you can’t see it in the dark. And I’m going to test more carefully, maybe I actually left the switch in the wrong position, but I’m getting way less battery life than that.