Is There a Tech Bubble? We’ll Know If It Pops

Earlier today I posted disruption vs. revenue and the tech bubble on the gust.com blog. I’m suggesting in that post that some special-case web-based startups have to choose between disruption or revenue, because they can’t have both. 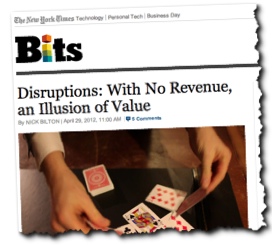 That may or may not be true, but I’ve been guilty of suggesting it is to a couple of startup software companies recently. I think both were special cases. They had a real chance to go really big and generate spontaneous buzz based on the product itself.  But locking their wares behind pay walls might slow their growth and dampen their success.

That may or may not be true. After the tech crash in 2000, I never thought I’d see that happen again, much less me recommending not covering expenses with revenue. Still, though, there’s Facebook and Twitter and Instagram and, oh my.

Bubble? Las Sunday the NYTimes’ bits blog published Disruptions: With No Revenue, an Illusion of Value. Author Nick Bilton says yes there’s a bubble and tells why he’s sure.

When this next bubble pops — and it will pop — the idea to make no money can finally pop, too. Then investors can start working with companies to build businesses that have long-term financial goals, instead of just building a short-term mystery.

But on the same day Chris Dixon (smart person) asked Is It a Tech Bubble on his blog and answered with some convincing analysis, “no.” And the second comment on that post is Fred Wilson of AVC (another smart person) saying:

[Zynga price] certainly doesn’t seem like a bubble valuation either. I do think there is more money sloshing around the tech/internet/mobile sector now than there has ever been. and that is impacting valuations across the board. The question is if this is temporary or the “new normal”. I guess we will find out.

So I’d like to answer this tech bubble question here, but as I was writing this, on Sunday, those other interesting and contradictory posts, from smart people, kept rolling onto the web. I ended up tweeting my conclusion to this post last Sunday, with the following tweet.

Uncertainy is a sign of intelligence. Maybe. I’m not sure.

One response to “Is There a Tech Bubble? We’ll Know If It Pops”