Why My New Kindle is Like the Treadmill in the Basement

I’m getting used to my new Amazon Kindle. It finally arrived while I 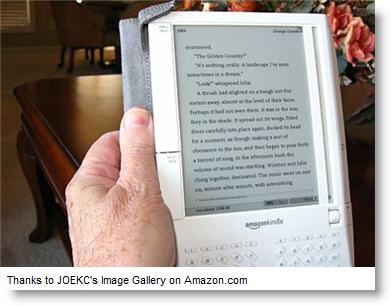 was gone the second week in January, and was waiting for me when I returned. So far it’s serving mainly as a reminder that I’m not getting as much time as I’d like to read. It’s functioning sort of like an unused exercise machine. I had a treadmill in the basement for several years. I’d go by it going in and out of the garage, each time remembering that I should get more exercise. But I didn’t get more exercise.

Aside from that rather personal note, which obviously isn’t the Kindle’s fault, my initial surprises were pleasant:

And, of course, some minor disappointments:

I would immediately buy a Kindle for two or three people in my family if it were priced at $199 instead of $399. The price strikes me as out of whack, sort of like that initial iPhone $600 price that went down a couple of months later. It’s an eBook reader, not a PDA, not a computer.

Still, there is something fundamental about keeping prices related to demand. Amazon couldn’t meet all the demand they had for early Kindle buyers. I ordered mine in early December, and I had to wait until early January. That’s not a time to lower prices.