Is That Solar Coming? Or Was it Hot Already?

The right solar panels spread over a 10 mile by 10 mile square of Eastern Oregon desert could provide enough power to run the United States. Or so I was told last week by Scott Pope, of Sustainable Wealth, who makes a living investing other people’s money in stocks and chooses those stocks based on qualities like sustainability, social conscience, governance, and environmental impact. 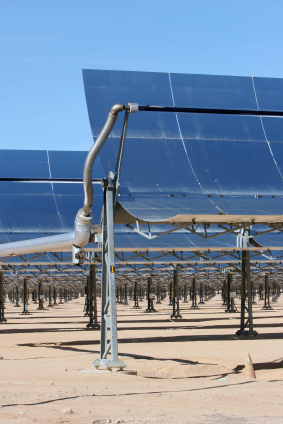 Meanwhile yesterday’s Sunday New York Times has a piece called Silicon Valley Starts to Turn Its Face to the Sun about a rush to invest in solar technologies.

Given the valley’s tremendous success in recent years with such down-to-earth products as search engines and music players, tackling solar power might seem improbable. Yet some of the valley’s best brains are captivated by the challenge, and they hope to put the development of solar technologies onto a faster track.

There is, after all, a precedent for how the valley tries to approach such tasks, and it’s embodied in Moore’s Law, the maxim made famous by the Intel co-founder Gordon Moore. Moore’s Law refers to rapid improvements in computer chips — which would be accompanied by declining prices.

A link between Moore’s Law and solar technology reflects the engineering reality that computer chips and solar cells have a lot in common.

“A solar cell is just a big specialized chip, so everything we’ve learned about making chips applies,” says Paul Saffo, an associate engineering professor at Stanford and a longtime observer of Silicon Valley.

I’m certainly no expert, but I wonder if the NYT doesn’t have cause and effect slightly off on this one. I’ve heard — I think Scott mentioned that during our talk last week — that venture capital investment has been driving progress in solar energy for 5-10 years already.

And then there’s the near rant on climateprogress.org, suggesting, not altogether politely, that it doesn’t take the New York Times notice to make Solar hot:

NOTE to NYT: Solar has gained traction already. And further growth won’t be driven by “will,” it will be driven by, uhh, the growing consensus on the need to price carbon dioxide emissions to fight global warming and, uhh, record high energy prices that will no doubt be even higher in a decade, coupled with technology improvements and mass production techniques, some (but probably not most) of which will come from Silicon Valley. But I guess the real story is not sexy enough for the Gray Lady.

Does it matter who was there first? I think what does matter is lots of people having the same kind of idea at the same time, and that, finally, people are starting to see newer cleaner energy as a money-making opportunity.