Do you ever wonder what happened to objective journalism? I have a thought about that.

Until the web changed everything, we got our news from a very few sources: There was a newspaper or two in every city. There were three major networks, ABC, NBC, and CBS, offering television and radio news. There were a few independent channels in each market, both on radio and television. And there were the national magazines, Time, Life, Newsweek, and U.S. News and World Report.

What we called journalistic ethics back then were also good business. All of those major news providers had to stay objective in order to reach a commercially viable audience. 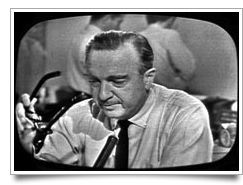 If Walter Cronkite or David Brinkley seemed biased, then nobody would have believed them. They had to stay in the middle to appeal to the general audience. Trust, professionalism, and credibility were the only way to make it big in news.

Sure, we also had the tabloids at the grocery store checkout counters, but nobody believed them. They didn’t depend on credibility to succeed, the way the major news sources did.

Today, however, the huge difference is that pulverization and special focus is everywhere. Newspapers are struggling but look at blogs and cable channels and the Huffington Post, and focus, even focus on a small portion of the political or economic spectrum, makes money, Consider Fox News on one hand and Huffington Post or all those absurdly extremist radio talk show hosts, and the handful of liberal ones too … they all make money by gathering an interest group or affinity group together, shutting out the outside world, or the objective real world, and talking only to believers.

As far as I can tell the traditional media, the ones I mentioned above, are still striving for objectivity.  To the extent that they still exist. But they are steadily losing power, audience, and importance.

I didn’t have a name for it then, but t was first aware of newsjacking more than 3o years ago. Here’s how

One response to “Is Objective Journalism Doomed?”